There’s been lots of talk surrounding the recent Obama’s portrait photos, unveiled this past Monday during a ceremony at the Smithsonian National Portrait Gallery, in Washington, D.C. The pair of paintings are surely the first of their kind, and not only because the portraits display the First Black Family serving in the Oval Office.

The artists behind the paintings are also the first Black painters commissioned by the Gallery, and in my belief the previous First family was quite strategic in their decision-making process. Various commentators have offered contextual accounts of the portraits symbolic essence, but many have missed the mark on the cultural importance of these two depictions. The paintings are in essence of historical influences but also play with the blurred lines of fact, fiction, future, past, and power in order to create a visionary emblem representing change. 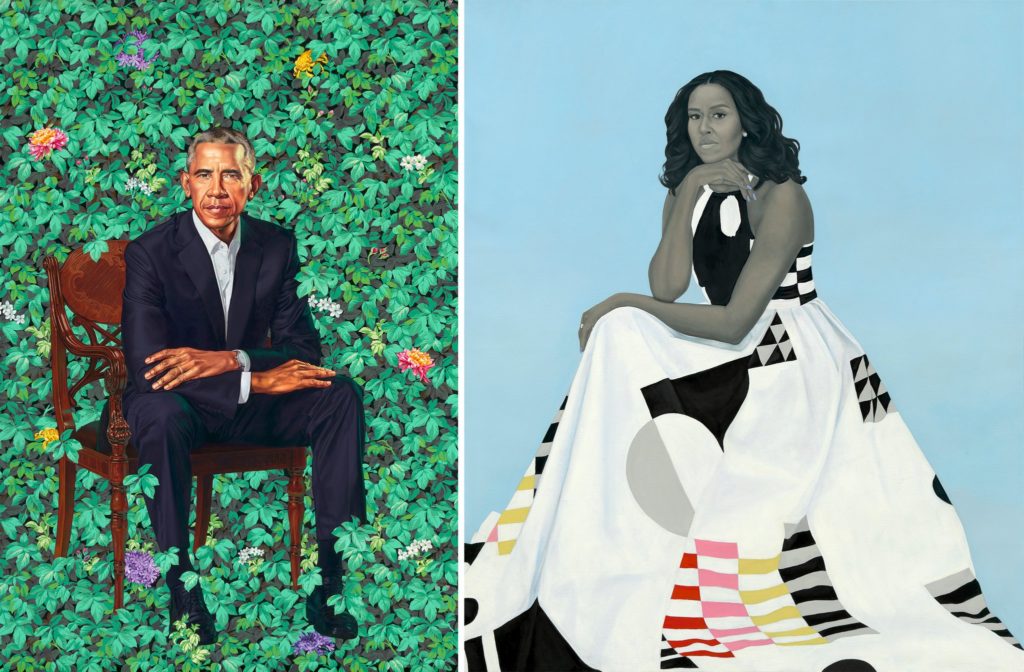 Let’s first identify Mrs. Obama’s portrait, a strikingly glamourous painting that features the previous First Lady against a sky-blue backdrop. At first look, observations highlighting Mrs. Obama’s gray skin and her larger-than-life geometric dress, are made. The viewer also notices the artist’s choice to soften Michelle’s definingly strong features. Lastly, the viewer is drawn to the look on Michelle Obama’s face, a solemn glare that has tentative gestures of scrutiny, indifference, intelligence, and collectivism, resulting in an all-knowing, altruistic depiction.

Michelle Obama knew what she was doing when she commissioned 44-year old Amy Sherald, of Baltimore, MD. It was a big deal to the former First Lady that a celebration of Blackness be present within the symbolism behind the entity that is the ceremonial practice of Presidential portraits. Sherald’s art, following the pattern with the Obama’s portrait, is usually of Black individuals sporting bold fashion choices against a pastel monochrome background. The use of gray skin, alludes to a “break away” from race as a social construct, despite her models being noticeably Black people(s). Her choice to paint Mrs. Obama in gray reinforces her choice of emphasizing that Michelle is more than just the First Black Lady. It is a brilliant choice, seeing that Michelle faced significant strife during her time in the White House for not being “soft-enough.” The gray is daring, and bold, character traits we attribute to the famous Michelle Obama.

Focusing on her dress, the uninformed viewer cannot appreciate the power in its meaning. Michelle’s dress, as depicted in Sherald’s portrait is designed by one of her favorite designers Michelle Smith for Milly, according to The New Yorker, in an interview with Smith, she claims the dress is “clean, minimal geometric print” and is “without a reference to anything past or nostalgic” and is “forward-thinking,” all attributes of Mrs. Obama herself. It was a powerful decision to depict The First Black Lady in a dress that represents progression. This compliments the fact that while in the White House, a house built by slaves, Mrs. Obama wanted desperately to serve her people and change the narrative of First Ladies, but also of Black women. Another important detail is that the dress is not couture, but rather cotton material, which further emphasizes Obama’s modest contemporary regality. President Obama detailed that she does not come from a family where people pose for portraits, and notes that her great-great grandparents were slaves. The mere fact that she was able to get to the point she reached, speaks volumes to the forward-thinking necessary that allowed the Obamas to enter the Oval Office. The former First Lady wants young girls, especially young black girls, to see her as a people’s person, one who can achieve anything. And looking into the eyes of Sherald’s painting of Michelle Obama, it is hard to believe that anyone will receive anything shy of that message.

Focusing on the former President’s portrait we are met with a beautifully detailed and challenging painting that much like his wife’s is sure to bite the bullet where presidential portraits are concerned. Former President Barack Obama’s choice to commission Kehinde Wiley, a 40-year old painter born in L.A. but based in New York, was also a strategic one. Wiley, unlike his female counterpart Sherald, is known for his paintings in the national and international art world. His depictions of Black individuals in contemporary dress against renaissance-like, or rather royal essence based paintings. Wiley is known to paint the way he does in his attempt to depict a Black monarchy expressed through Black culture that runs perpendicular to our White normative world, where European beauty standards are deemed “normal.”

Former President Barack Obama is set against a backdrop of vibrant floral designs and other plants. Wiley was strategic in his choice of Flowers, each representing an important place to the previous Commander in Chief. His birthplace Hawaii is represented by (jasmine), his father’s birthplace Kenya is represented by (African lilies), and Chicago, the city where President Obama met Michelle and where his political career began is represented by (chrysanthemums, the city’s official flower). From the shoulders up, the plants and flowers seem to be 2D, and the head of the former presidents juts out, displaying an inquisitive look that infers he has a lot on his mind while remaining “cool, calm, and collected,” as we Know Mr. Obama to usually be portrayed. As we venture down to the lower fifths of the photo we see that his feet are floating, but also that the flowers have playfully entangled themselves between the wooden chair President Obama sits on and his leg, which is dressed in a black suit. Wiley chose to depict President Obama in a opened, tieless white dress shirt, arms loosely crossed at to create a perfect line across the President’s cuff-links. In its entirety the painting connotes, a down to Earth President Obama. 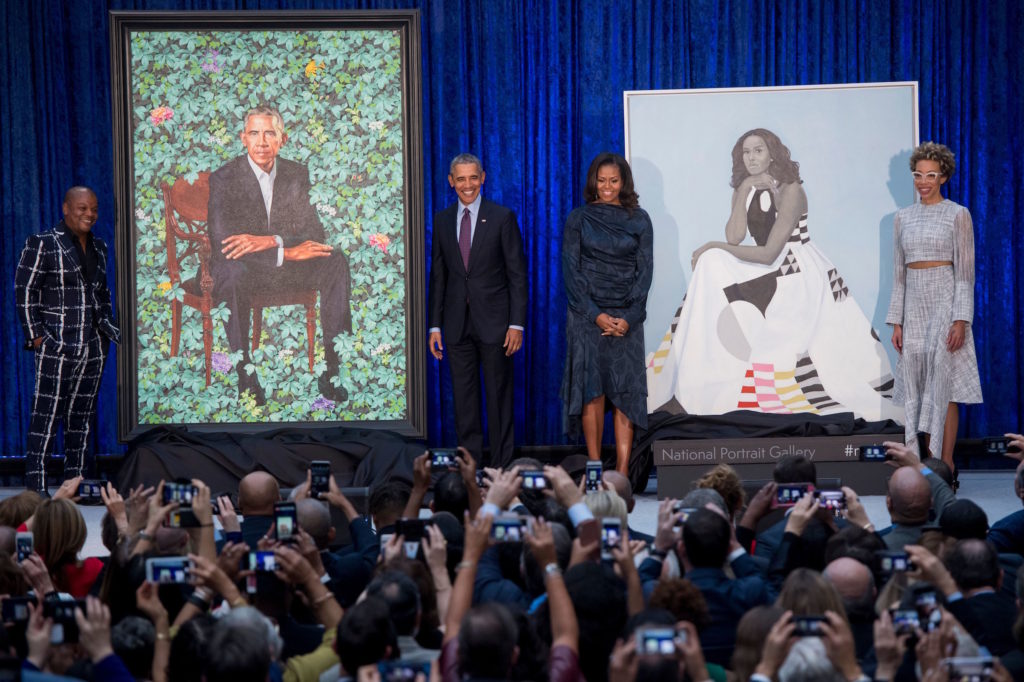 In a world where the First Black President had to work twice as hard, in order to serve as the 44th President of the United States, a fact made prominent by the color of his skin, Kehinde Wiley depicted the previous leader in a larger than life while modest manor. The painting was meant to challenge our societal understanding of power and privilege. We are meant to think about the rearing of our nation’s previous president in a world where he served often as a overly judged, sometimes misunderstood, well-liked international celebrity. It is no secret that Barack Obama added to the conversation of race in his attempt to change the narrative of a Black man in a nation that labels Black men as thugs, criminals, vagabonds. I think this is why the fact that Mr. Obama appears to be floating is another important note. Stolen from the heart of Africa, it has been hard for Blacks in this country to trace their roots, and the use of plants connote new roots, blossoming ones that coupled with Michelle’s forward thinking progressive manor, had the power to impact our nation and world in groundbreaking ways.

It is true that these portraits are sure to be a spectacle if not for their black subjects, for their blatant disregard of conservative oil on canvas depictions, as their previous leaders chose to have done. However, make no mistake, the Obamas knew what they were doing when they chose Sherald and Wiley to paint their portraits for the gallery. The Obamas represent a lot of things, and they have been criticized for much more, their paintings serving no exceptions. Still, one fact that remains true to all, is that they are the first of their kind. They are the First Black Family and because of this, they have created a new visionary promise for our nation, one that is now trapped in the paintings that will hang from the Gallery in D.C. These portraits speak to a new America, one that is forward-thinking and appreciative of diversity of thought, culture, and people.