Press Pass LA was in attendance at this year’s ultra-exclusive SeaChange Summer Party hosted by Oceana on August 1st. The event was held at The Strand at Headlands overlooking the Pacific Ocean in Dana Point, CA.

Who is Oceana? The international organization works to protect the oceans all over the world, defend endangered sea life from harmful fishing practices and to restore fisheries. 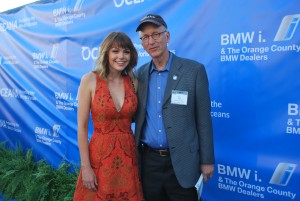 A tent filled with live auction items included everything from jewelry, vintage designer purses and travel packages. More elite auction items included four tickets to the television show 2 Broke Girls with a private meet and greet with one of the shows main cast members Beth Behrs. Or for those wanting to hang with royalty, there was even a package to spend four days with Count & Countess De Vanssay of France at their private chateau with all proceeds going to Oceana.