NOT MUCH TO SEE IN OCULUS

Horror doesn’t have to be just a gore fest, a huge body count or some kind of powerful, demonic entity. Sometimes, the strongest elements of fear are what is going on in a man or woman’s mind. With Oculus, Director Mike Flanagan is able to force the audience to the edge of their seats without an unnecessary orchestra sting or walls dripping with blood. 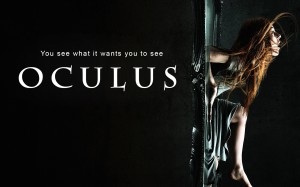 The plot details the traumatic events of the Russell siblings Kaylie and Tim, played by Karen Gillan and Brenton Thwaites respectively. As children, they saw their father brutally slay their mother at gun point, only to be shot by Tim. After 11 years in an asylum, Tim is released into the care of his sister. For her entire life, since being traumatized, she has been doing exhaustive research into a mirror that was hung in their father’s study.

According to her findings, every single owner of the mirror either died or murdered their loved ones in both bizarre and unusual circumstances. With the company of her brother, Kaylie has taken the mirror to her childhood home, set up extensive surveillance equipment and begun experiments with the hopes to prove that it was the influence of the mirror that was responsible for her father’s actions. At first, Tim is convinced, through his therapy, that everything that they witnessed can be explained away. What continues is a psychological thriller that tests both the audience’s perception of reality as well as the characters.

The real weakness in the film is the acting. With nearly the entire film taking place within one house – albeit between two time periods – the entire film will depend upon how the actors interact with each other. With almost 1/3 of the film centering on child stars, there aren’t going to be any Oscars given out for acting. As for Thwaites and Gillan themselves, while there isn’t anything particularly bad about the way that they work together on screen, it was just not a very stellar performance.

Musical stings and jump scares have become the most prevalent aspect of horror, and you can always see it coming. The camera focuses on a character, the audio track dies down save for a few breaths from the focal character, and then… BANG! Loud music sting, horrifying image on the screen, and a scream from the lead. Oculus, on the other hand, goes painstakingly slow with lots of close, long shots with a minimum of edits, very similar to Stanley Kubrick. There are a lot of filters or other editing tricks that will further enhance the suspense of the film.

The other most abused aspect of horror films is a twist ending; something that intentionally deviates away from the hinted conclusion. Once again, Oculus took the other road. When it comes to filmmaking, the journey is more important than the destination. Even if you know what your inevitable destination is, that doesn’t make it a bad film unless it isn’t an interesting ride along the way. Oculus is nothing if not interesting.

The special effects were almost entirely practical and, therefore, much more believable. Even when there was a hinting of a demonic presence, the effects were quite impressive. At the risk of spoiling one of the stronger aspects of the film, let’s just say when there seems to be a ghostly or otherwise supernatural presence on the screen, make sure to look at the eyes, and you will get a hint to the level of detail involved. 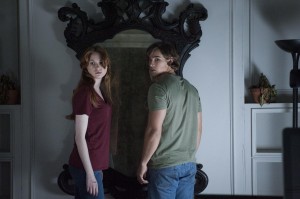 Oculus is far from a perfect movie, between the somewhat hokey acting, actions from the lead character at times being completely at odds with their motivations and an ending that leaves something to be desired, but it has everything that you need out of a good movie. It has suspense, it will elicit an emotional investment and therefore strong reaction from the audience, it has legitimate character development and arcs as we see the leading siblings develop over time and experience, and it as legitimate surprises that most will not see coming. It is several steps above mediocre, and will be enjoyable by anyone who enjoys movies from the suspense, psychological or even horror genres.