OH WONDER DAZZLES AT THE ECHO

Press Pass LA was invited to join the duo as they took the stage for their second US show ever at The Echo 10/6.

If you haven’t heard about Oh Wonder, let me fill you in. 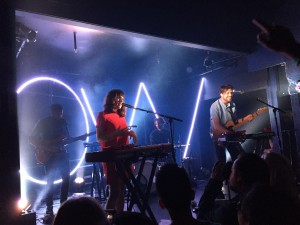 The duo began self releasing songs (1 each month) a little over a year ago. Recording in a living room, Anthony and Josephine became favorites on Soundcloud & Hype Machine. With each new song came thousands of new fans, a then a charting album, quickly becoming the ultimate DIY band & an indie dream.

In anticipation of their album release, Oh Wonder booked a few shows in the states at small venues in LA & NY for a nominal fee (you could hear people in the audience Tuesday night crooning about how they scored the $13 tickets). To put into perspective how strong the Oh Wonder hype is – they sold out these shows without ever having stepped on the stage as a band before.

If it sounds like I’m gushing about their remarkable climb on to the music scene, it’s because I am. 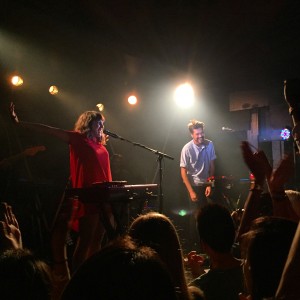 The show Tuesday night at The Echo was filled with eager music lovers excited to have the opportunity to brag about seeing the band’s second ever US show. Whispers could be heard, quite literally echoing the same sentiments – “we will never see them in a venue this small again.”

Playing 12 out of their 15 songs from their self-titled release, favorites included their opening number Livewire, Lose it & Drive. “You guys were the people that bought tickets to the first shows in the US…months ago. Thank you for sticking with us,” Josephine softly spoke to the cheering crowd between songs.

The band let the LA audience in on a little secret as well – they recently had their song Heart Hope tattooed on each other down the street from the venue. A perfect testament to their emergence as trendsetters in the new age of music discovery – a little bit of heart hope goes a long way.