That’s how Josephine and Anthony of Oh Wonder describe stepping out on stage every night since their debut album release last year. “Wild” certainly depicts the journey this songwriting duo has been on since Press Pass LA caught their second ever show this past October. 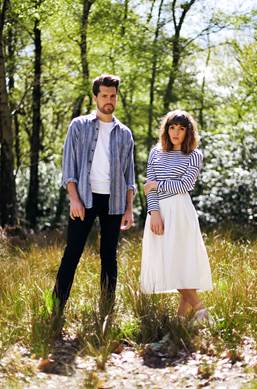 “We remember the excitement of playing our first US shows! That excitement hasn’t worn off, and we hope it never will,” the pair stated in an exclusive interview with PPLA. “Since then we have played in three other continents and more than ever we feel like performers. We started the project as songwriters, and now we feel most at home on the stage, connecting with an audience.”

Those statements can certainly be confirmed after Oh Wonder’s first of two sold out shows at the El Rey Theatre on 1/13. Blazing through a set list which included favorites Lose It, Drive, Body Gold and their new single Lost Without You, the band commanded attention – and for a venue that, from my experience, usually draws a chatty crowd

– they earned it. Phones went down and conversations halted for an acoustic rendition of Midnight Moon, and it felt for a moment that we were all friends witnessing some sort of secret magic in LA together.

As for what’s in store for 2016? “Releasing music is in fact our main goal of 2016! We can’t wait to write and release some more songs to the world, but right now we’re so content with touring until that moment comes!”