The 2014 Primetime Emmy awards are upon us which means Hollywood is jam-packed of star-studded parties this weekend! OK! TV kicked things off Thursday night with the OK! Awards: a glamorous pre-Emmy party not only celebrating the work stars do on-screen, but what they do off-camera as well.

The event featured the ‘Giving Carpet’, which honored some of television’s most philanthropic celebrities. Representing ABC’s multi-Emmy nominated reality competition, Dancing with the Stars, was Mark Ballas, who passionately spoke of his efforts to help empower the youth. “I was starting up my own charity called The Ballas Foundation, which is about bringing awareness to depression and bringing kids out of the dark and out of that notion of not being able to be themselves and do the things that they want to do,” said Ballas, who when not performing gives motivational speeches at schools. “I encourage kids to follow their dreams and do their aspirations and to not be bullied about it and be told that it’s not okay to do more than one thing. I love going to schools talking to kids. I get them up, I get them dancing; we talk about music.” Helping those battling depression is of great importance to Ballas as the disease hits close to home with him.

The dancer/singer added that the death of legendary comedian Robin Williams was an all too familiar tragedy. “I did some work with the AFSP, which is the American Foundation of Suicide Prevention. I lost my uncle ten years ago to suicide and it was devastating. He was very depressed. I feel like it’s one of those subjects that doesn’t really get talked about too much. I like bringing awareness to it and saying it’s okay to talk about this. Especially, with the loss of Robin Williams lately- it was the exact same thing with my uncle. He did it the same way- depressed. It’s terrible.” 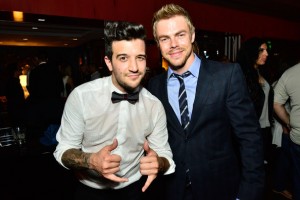 Ballas also entertained crowds during the evening as he performed some of his newest music at the party. “I got two singles out right now. “Get My Name” is out on iTunes and the other one that just came out “Miss Incredible”. I’m about to drop my full length EP on September 16th and it’s called “Kicking Clouds”, so stay tuned. I’m excited; I’ve been working on it for two years.” When Ballas isn’t dancing or recording his music, he is a self-described ‘TV junkie’ and says he is rooting for his favorite shows to pick up some trophies at the Emmy’s Monday.” Orange is the New Black, Game of Thrones, Breaking Bad, House of Cards, Boardwalk Empire; those are my shows. I love them.”

Like Dancing with the Stars, HBO’s True Detective is also a big Emmy contender, and one of its talent’s, Alysia Osche, was beaming with joy at the party about the success of the Matthew McConaughey starring drama. “I am just so honored to be a part of a show that is nominated and so well-received. We were in such an isolated part of Louisiana when we were filming it so we just didn’t know it would be received so well, so I’m just so excited,” said Osche, who added how proud she was of her co-stars McConaughey and Woody Harrelson, who are both nominated in the ‘Outstanding Leading Male in a Drama’ category. “I hope it wins! I hope Matthew wins! Matthew or Woody because they’re both competing against each other in the same category, but I worked with Matthew. He’s amazing.” True Detective is up for five Emmy awards that include a nomination for ‘Outstanding Writing for Drama’, which is what Osche said most drew her to the series. “It’s the words. When I read True Detective for the first time”, the best way I can describe it: it was like velvet in your mouth.”

The Primetime Emmy awards aren’t the only thing people in Hollywood are talking about at the moment as the ALS Ice Bucket Challenge to raise awareness for ALS has quickly spread among celebrities. And in perfect timing with the night’s theme of giving back, actor Spencer Garett (USA’s Satisfaction) said he had just been challenged earlier in the day. “I was just challenged so now I have to find a way to dump ice over my head,” said Garett, who said he couldn’t be more pleased about the challenge as bringing attention to ALS is something he has been dedicated to doing for a long time. “I’ve been involved with Project ALS for about 20 years. Obviously I’ve donated because it’s a cause that is very near and dear to my heart, but I love this Ice Bucket challenge thing that’s been going on all over the place. It’s very cool and it’s raising an enormous amount of awareness.”

With stars shining on and off-camera, the OK Awards were definitely more than just ‘OK!’