Ever wonder what you have in common with Tori Spelling? If you’re not a hot, blonde, famous actress, you’ll have this…watching the 87th Academy Awards tonight from your couch. Not glamorous but adds to why we love us some Spelling!

We caught up with Tori Spelling and hubby Dean McDermott at the OK! Magazine pre-Oscar’s party at the Argyle in Hollywood and fell in love, they really are so cute!! 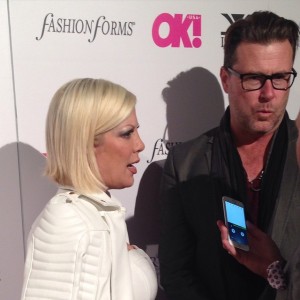 The mom of four says she’s looking forward to a night in on the couch in sweats to watch and is rooting for Boyhood to get the ‘Best Picture’ Oscar while McDermott voiced his vote for Foxcatcher, nominated for ‘Best Director’ along with a nod to Mark Ruffalo for his supporting role.

BRAVO’s Vanderpump Rules stars Tom Sandoval and Jax Taylor turned heads on the carpet looking handsome as ever as they jump-started their Oscar weekend, as did all the babes of Dancing with the Stars.

The men seem to be putting a little extra effort into their red carpet style now more then ever, but all eyes will be on Hollywood’s leading ladies Oscar night. Glam squads are hard at work, the fashion police are armed and ready, but stylist Jeannie Mai says she’s got her eye on stars like Melissa McCarthy, Kerry Washington and Emma Stone because they always rock the best accessory: personality. We would have to agree!