ON THE CASE WITH NCIS: NEW ORLEANS’ SHALITA GRANT

Sonja Percy is back, and she is here to stay.  Shalita Grant, who plays the ex-ATF undercover agent on NCIS: New Orleans, is now a series regular.

Grant’s character Percy appeared in the show’s first season, but is now permanently part of the crew.  Press Pass LA was able to catch up with the very busy actress to talk about the new season and how she keeps fit both mentally and physically.

An early morning call and a bubbly Grant greeted me on the other end of the phone.   She was already on set preparing to shoot some action filled scenes for the new season.

“The stunts will be off the chart!” Grant explained with much excitement. “Percy is a strong woman, physically and emotionally.  She’s serious about her job,” she continued.  That description not only describes Percy but Grant as well. 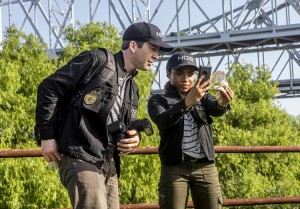 To keep in shape, Grant weight trains regularly in her home gym along with a little cardio such as jumping rope or sprinting.  She also keeps pre-packed meals with her for healthy eating on set.  Luckily, she believes in having a  cheat meal or a “congratulations” meal as she likes to call it. When she does reward herself, she’s chowing down on a New Orlean’s po’ boy or anything with alligator.

Grant is living the dream that many actors wish to have some day, but it wasn’t always so sweet. After receiving a Tony nomination for her role in Christopher Durang’s “Vanya and Sonia and Masha and Spike,”  Grant set her eyes on Hollywood.

Although a talented, seasoned theater actress, it would be a year before she would work consistently on screen.  In the meantime, Grant took a bartending job to make ends meet.  The thought of having to start over in Los Angeles soon turned into frustration.  Grant even thought about quitting the business, but instead she decided to go harder. “The no’s and rejection really pushed me to up my game even more,” Grant explained.  She pushed her team for answers as to why she wasn’t booking parts.  In order to win, she needed to know how she could be her best self. “I wanted to make it as hard as possible for them [casting directors] to tell me no.”

A new workout regimen and intense audition preparation that would last hours changed everything.  After her first booked role in Hollywood, the work started coming in every other month. She eventually landed herself a spot in the CSI franchise.

The work has continued rolling in. Grant will be starring in the film Mercy Street  which is due for release in 2016.  This role was “challenging, extremely provocative” and pushed her to “uncomfortable places dealing with hard subjects.” We can’t wait to see more of her.

Until then, get your Grant fix now by tuning in for season two of NCIS: New Orleans every Tuesday, 9/8c on CBS.