Jonathan Keltz has come a long way from his roots in New York. From appearing in the popular HBO show Entourage, to becoming a series regular on the CW period drama Reign he is not one to be easily categorized.

In Reign, he plays the hopeless romantic Leith, trying to make his imprint on the world and do right by society. As season two comes to a close, we caught up with Jonathon to see what we can expect in the season finale, which airs May 14th.

PPLA: Tell me a little about your move from New York to Los Angeles and what it’s like to shoot in Toronto?

JK: I moved to Los Angeles directly after high school not thinking that it was going to be anything permanent. I went with a few of my friends who were from another country, had an amazing pilot season and winded up staying and it’s been great ever since. Shooting in Toronto is nice, it’s a great city; weather is unsettling but I can’t complain.

PPLA: Can people just tune in to the latest episode or should they start from the beginning?

JK: Reign is a period drama and there is a lot of character development. A lot has happened since the beginning of the show and there is a lot left to happen until the end of this season. Definitely go back and watch the first season and catch up, you won’t regret it.

PPLA: What is it like to work on a period drama?

JK: Reign is a modernized drama that is rooted in history with factual historic events. The show cast the story as a spin-off to the middle ages. It’s a lot of studying source material and studying certain mannerisms. Wadrobe and make-up does such a good job of making the characters look authentic. From the time I wake up until the time I walk off set, I am in character.

JK: Leith needs to do the right thing for love and wants to do right by the King. He started in the kitchen and is working his way up. He falls in love and is constantly waiting for Greer who is currently engaged to several people. Then Leith comes into money and finally feels as if he is good enough for her.  Although fortune may have hit for Leith, he is still runs into roadblocks when it comes to Greer. Then the plague hits and Greer marries the man that she is engaged to.

Leith leaves the land that he was given and is forced back to his native land where he reconnects with Greer who is now working hard on her independence. She is trying to become her own woman and in the process has become the Madam of the town, running her own brothel. As the season continues Greer is constantly fighting against love, wanting to stay independent, while Leith is trying to find a compromise in order to make her his wife (which includes needing Greer to get an annulment from her current husband.) 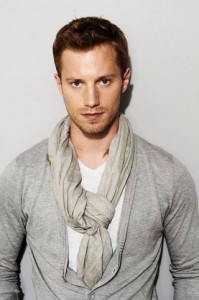 PPLA: Well that’s certainly some drama! What can we expect for the season finale?

JK: There are several new characters that are going to be introduced. Nobody is safe, and there is a whole lot that is going to take place in the next three episodes.

The season two finale of Reign Premieres May 14th. Good news for Reign Fans, it was picked up for a third season and the cast and crew will begin shooting in July! Tune into the CW Thursdays @ 9PM.