For those who aren’t familiar with Molly McQueen, there is more to her than being known as notable actor Steve McQueen’s granddaughter. McQueen is a rising actress who has launched the web series Reasons I Don’t Have A Boyfriend with costar and friend Caitlin Harris.

Press Pass LA had the opportunity to talk with Los Angeles native about her buzz-worthy web-series and her experiences in the acting world. Without further adieu, check out our fun interview with Molly McQueen! 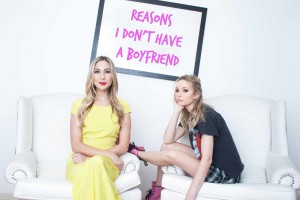 Molly McQueen and Caitlin Harris star in the new web series “Reasons Why I Don’t Have A Boyfriend.”

PPLA: How did you come across the idea to launch your upcoming web series Reasons I Don’t Have A Boyfriend?

MM: Well, we always created it with the intention of launching it. So, it started in acting class—Caitlin and I had met each other. And you know, we were a little frustrated waiting for auditions to come to us. We were sitting around, talking to [our] girl friends, and everyone has these amazing dating stories! It’s such a fun point of conversation between friends. But, we wanted to approach it from the perspective as why girls sabotage it a little bit, as opposed to things being done to them.

PPLA: Well, I like that you guys kind of created your own opportunities by trying to launch the show. It’s great!

MM: Yeah, that’s what the goal was! And, we’ve been getting these wonderful responses. We kind of did it on a shoestring [budget].

PPLA: In speaking about the show being raved about, people like singer Hilary Duff have taken a liking to it—a great accomplishment within itself! For those who haven’t caught on to the trend yet and are unfamiliar with the show, how would describe it?

MM: Two girls are trying to explore the dating scene in LA and they come up with a period of reasons of why they can’t hold down a relationship.

PPLA: It’s actually pretty realistic since people can relate to it.

MM: Yeah, totally! Every one of them is based off of a true story. It’s terrifying to admit, but true.

PPLA: So, have any of the stories been from your own experiences or are you pulling inspiration from friends?

MM: A few are friends [stories]. Most are like the beginning of the episode “The One Who Can’t Hang”—that was me! But, a bunch of people have been hitting us up, telling us reasons or funny stories—we have an endless supply of these. It has been so [much] fun seeing people come out of the woodwork and posting [comments] on our website.

PPLA: So, what do you think makes the show unique?

MM: As I said before, I think that it’s mostly how girls get in their own way—not necessarily outside influences. Who knows where it will go from there? We want it to be a story about our flaws, but also our strengths.

PPLA: The great part about this show is that you can take the story line in so many different directions.

MM: Yea, we’ve been lucky that we’ve been taking some meetings for some interest—maybe even turning it into a show.

MM: The idea is that if it was a 30 minute show, you would obviously have so much more time to explore the relationships and take it from there. Obviously, these are very short [episodes] and I do think it lends itself very nicely for a web-series. And obviously, this is just the beginning!

PPLA: Plus, you will have a bigger budget to work with—no more shoestring budget, hopefully. So, how has it been like to work with your co-star Caitlin Harris?

MM: It’s great! I think one of the best compliments we’ve gotten is that we just have really good chemistry—which obviously, we’re first and foremost friends.  But, it’s been the most fun experience especially because we both wrote it and produced it together.

PPLA: So, what has been the most fun part about working on the show?

MM: I think finally getting it out has been the most exciting thing and kind of seeing if it resonates with people. The whole process is hard, but it’s fun! Casting has also been fun because we are finally on the other side and we have an endless pool of talent.

PPLA: So, can fans of the show expect to see a second season in the near future?

MM: That’s what we are talking about right now! Yes, we definitely plan on continuing to do it and trying to find sponsorship. We’ll see if we have any opportunities!

Make sure to catch more of Molly on her web-series Reasons I Don’t Have A Boyfriend!