ONE-ON-ONE WITH THE CAST OF THE CHOICE

It’s about that time to grab your tissues and sit back and enjoy the eleventh Nicholas Sparks novel turned film with, The Choice starring Benjamin Walker, Teresa Palmer, Maggie Grace, Alexandra Daddario and Tom Welling.

For those unfamiliar with the book, the story is of a feisty independent medical student, Gabby Holland (Teresa Palmer), who is preparing to settle down with her long time boyfriend, but when she ends up moving in next door to the easy-going, ladies man Travis Shaw (Benjamin Walker), both of their worlds begin to shake into something neither of them had planned. The story takes place in North Carolina, and includes a strong set of friends and family that surround these characters and the moments that end up shaping their lives. 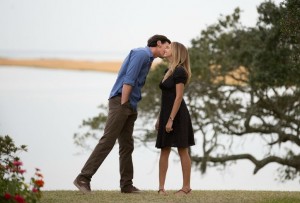 Benjamin Walker and Teresa Palmer star in The Choice.

“If I could go back to my eighteen-year-old self and tell her that one day you would get to play an Allie Hamilton-type in a Nicholas Sparks film, I’d be so shocked,” said Teresa Palmer about being cast as Gabby Holland.

We all know that Nicholas Sparks is one of the most beloved authors of our time and is known for creating heart wrenching stories including The Notebook, The Last Song and A Walk to Remember, which makes being a part of The Choice cast that much special.

“Shooting on the inter-coastal highway, it was so beautiful, like a getaway,” said Noree Victoria, who plays Liz in the film. “We were on boats, having barbecues, bonfires, picnics, it’s unfair to call this work,” said Anna Enger, who plays Megan.

When asked about being a part of the production and getting advice from Nicholas Sparks, Brad James, who plays Ben in the film had this to say about Sparks method, “ It’s less about the lines, and more about what the audience needs to feel.”

And if a track record is all we need then looking back at all of Sparks films like Nights in Rodanthe, Dear John  and Safe Haven we the audience will definitely be feeling all the feels.

The Choice is out everywhere in theaters February 5, 2016.