It is for these reasons they’ve that garnered comparisons to The Strokes and Neutral Milk Hotel. And remarkably, they’ve done it all themselves. Their upcoming sophomore album, Splendor was recorded entirely in vocalist and founder Bryan Acaksu’s apartment. We recently chatted with Akcasu about this feat, the band’s history, and this new release. 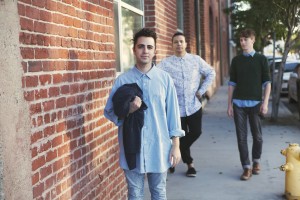 PPLA: What is the significance of the name Two Cheers? How did you settle on that on that moniker?

BA: I was reading a book of essays called “Two Cheers For Anarchism” and it occurred to me that the “Two Cheers” part had a nice ring to it. It also sort of suggests the spirit of our band – when you make cheers you are celebrating something and I like that element of it. Lastly, I like the book too, and when people ask about our name, I get to talk about it.

PPLA: How did you meet and decide to take on the adventure of starting a band together?

BA: I had been writing and recording music on my own for awhile but was feeling kind of insecure about going full steam ahead with starting a band. Meanwhile, Mitchell had basically given up on making music after his band from college broke up. Our girlfriends at the time were friends, so they eventually introduced us and we got to talking about music.

I played him some of the music I was working on at the time and we kind of clicked on the direction we thought we could go with it. We started meeting once every couple weeks when our girlfriends had play dates and had what were essentially improv sessions. We started to get really excited about the music we were making and both started to feel more confident that we could start put together a group and start playing shows. So, we used the album I recorded last year (Two Cheers) to find Bryan Panzeri and Al Aguilar to fill out the band and we started playing shows! We got pretty good together and all became really good friends too.

PPLA: What were some of the benefits and difficulties of recording your new album in an apartment?

BA: It’s not our style to be on the clock when we are making music and especially not when we are trying to capture performances that are genuine instead of just dialed in. For instance, I like to be able to drop what I am doing and go record a few vocal takes when the mood strikes me instead of doing it because the producer tells me it’s my turn. The other major thing is that I think I can do a better job engineering and mixing than most of the people out there that I can afford to pay.

For instance, since I know how I want the record to sound, I know exactly what to record and how to record it, including what microphones, preamps, and compressors I’d like to use for each instrument. The difficulties come when you want to get a really ripping guitar tone from a cranked amp, because the neighbors don’t like that. I guess another difficulty is that I don’t have all the gear I would like to use so the recordings aren’t as polished as I want them to be.

PPLA: How would you describe the difference, musically and conceptually, between this album and your self-titled debut from last year?

BA: Splendor  is more upbeat, more concise, and simpler in a lot of ways. It’s a little wilder and a little more aggressive. The basic sketches for the songs came about in a very spontaneous way and so the songs are more surprising to me. It translates better to the basic rock band format we were working with. It’s a little more natural. The songs on the new album are more related to each other conceptually; they kind of explore different aspects of this certain period of my life but with some overlap. It’s not really an explicit thing, but the song order kind of hints at the story and so there is a kind of spiritual, intellectual progression that takes place.

PPLA: Do you have a favorite lyric from this new release?

BA: Definitely the song “Splendor”. It’s about feeling completely in awe of the world, being humbled by the majesty of it, and taking a step back to watch the thing happening. I feel that way a lot these days and it saves me from myself.

PPLA: plendor seems to feature some rumination on death, loneliness, nature, and society. What are some of the experiences and drivers that inform your songwriting?

BA: Well, the album is partly about losing faith in society and learning to see that a lot of what I valued in the past came from other people’s conditioning and propaganda about what life is about and how I am suppose to live it. It’s also partly about facing death, that of someone close to me as well as my own. I consider death a lot, because it puts everything into perspective. I wonder a lot, “If I knew I was going to die tomorrow, is this something worth doing?” It makes me interact with the world in a very different way and makes my relationships very different than they used to be.

I also consider death a lot because if I don’t face it, someone can always hold it over me and scare me with it: “If you don’t play my game, you’re gonna end up alone on the street or even dead.” But the only reason to play a game is that it is fun or meaningful, and that’s something I have to invest into it myself. The last song on the album Strawberry, kind of reflects my current state of mind. It’s written from the point of view of someone who doesn’t see things through a cultural or social lens, but instead senses and values everything directly, simply for what it is. He might be homeless and a little bit crazy, but he is no one’s prisoner because he has freed his mind and he can contemplate the world around him without any kind of baggage.

PPLA: What do you hope listeners will take away from the album?

BA: We put a lot into this album and we did it all by ourselves. We did it because we love it and we think other people could love it too. It’s a lot of fun and it makes the people around us happy when they listen to it. So, I guess I hope people are moved by it on some level, whether it makes them dance or makes them cry or makes them wonder.

Splendor is due out this July. Visit two-cheers.com for more information ancheck out their new single “Anchor” on Soundcloud and make sure to check out The Explode Boys.