The UK is no stranger to hugely successful boy bands! And the latest, British band Rixton, is set to be the next big sensation. They captured the eyes of America while performing at this year’s 2014 Teen Choice Awards along side Jason Derulo, Demi Lovato, and more, and their latest single “Wait on Me” is on every radio station across the country.

Americans do love their Brits! Lucky for us, the band closed out the summer with their “The Broken Heart Tour” – a headlining full U.S. tour sponsored by Chex Mix – and they launched their official fan club on Fahlo in September. With such an exciting few months, they’ve left fans wondering what’s next for the band whose hit single, “Me and My Broken Heart” went platinum. Press Pass LA sat down with the band to find out just that!

PPLA: How did the band first come together?

Rixton: It all really started with Jake’s decision (at age 16) to drop out of school and dedicate his life to making music. He teamed up with Danny- who had recently quit university for the same reason- and the two began playing covers in pubs around Manchester spending all their time songwriting together, even living in a caravan in Danny’s parents’ garden to make ends meet! About three years into writing and gigging, Jake and Danny crossed paths with Charley, who is from Essex, and quickly recruited him as lead guitarist. Charley had recently left the pop-punk band Rio and brought an edgier energy into Jake and Danny’s pop/R&B-influenced sound. After about a year of the three of us writing together, we asked Lewi to join the band as the drummer. We met Lewi through Jake’s girlfriend, at the time. He had been playing in a variety of bands and really perfecting his drum skills for about seven years. He was actually originally inspired to learn drums after seeing the video for System Of A Down’s mind-blowingly complex “Chop Suey.”

PPLA:  Who were some of your musical influences growing up and/or now?

Rixton: It’s quite eclectic. The one thing that ties us together is R&B!

-DANNY: Stevie Wonder and Elton John. I’ve played piano since I was four.

-JAKE: I grew up in a singing family so Michael Jackson, The Beatles, The Who, The Rolling Stones.

PPLA:  Who would you compare your music to?

Rixton: We’re a Pop/ R&B band. Our music has similarities to Maroon 5, One Republic, Justin Timberlake. We also love classic acts like The Beach Boys. There’s an entire a cappella song on our album. We think our music appeals to everyone.

PPLA:  In only two short years, you have managed to get signed by Scooter Braun (who has worked with Justin Bieber, The Wanted, and Carly Rae Jepsen,  and is partnered with Usher) and put out your first official single “Me and My Broken Heart” which came out in March and already went platinum. What do you attribute to your quick rise to success?

Rixton: We’ve actually each been working on music and playing in bands for years and have been together as a band for almost four years. We’ve been able to reach a level of early success so quickly because when we signed with Scooter. We knew what we wanted and weren’t willing to sacrifice our goals and our sound for the success.

PPLA: What are the major differences playing to American fans versus back in England? And what do you miss most when you are away from home?

Rixton: We miss the tea.

PPLA:  You first broke on Youtube. Do you think new media is the way more new musicians will be found? Did you ever think you would get discovered this way?

Rixton: We actually started uploading videos to YouTube because we knew that was how bands were getting discovered. Our first video got a ton of early views so we decided that was the best way to keep getting ourselves out there.

PPLA:  What was it like having Scooter Braun approach the band after seeing your “Have Yourself A Merry Little Christmas” cover video?

Rixton: Jake hung up because he thought it was a joke. Then he started crying!

PPLA: You recently wrapped The Broken Heart tour. What was your favorite moment from the tour? What are your hopes for the next few months?

Rixton: Our favourite thing is meeting new people and our fans at every show. We are looking forward to a lot more touring in the upcoming months!

PPLA:  You’ve opened for Justin Bieber and Ariana Grande and recently performed at the 2014 Teen Choice Awards. Do you have any rituals or superstitions before a big show?

Rixton: Before the shows, we do a “Wolf of Wall Street” chant. You know, the one that Matthew McConaughey does…we do a little something like that.

PPLA: What has been the most exciting or most intimidating thing about your journey so far?

Rixton: The most exciting thing has been getting out on stage and being able to play our songs live for the fans. We love seeing their reactions.

PPLA: We always love band trivia! Your band was originally called Relics but you changed the name to Rixton. Why the switch?

Rixton: We found out that there was actually already a band called Relics. They threatened to take action if we didn’t change our name. At first we didn’t think much of it, but soon realized they were serious. We think it all worked out in our favor! 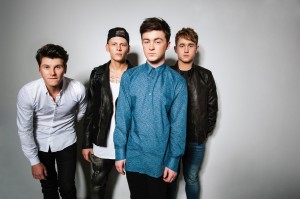 PPLA: You are a relatively new band and a young band. How do you see your sound evolving as you grow as a group and individuals?

Rixton: A band’s style is always evolving and who knows where our sound will take us in the years to come but we intend to always stay true to ourselves and push our music creatively.

PPLA:  By this time next year, where will you be?

Rixton: By then, we will have our album out and hope to continue to be able to play our music live for our fans. Hopefully we’ll be headlining more tours.