ONE REASON TO GET EXCITED ABOUT GHOSTBUSTER’S “ALL-FEMALE” CAST: CHRIS HEMSWORTH

While there has been a lot of buzz about the much-anticipated Ghostbusters remake featuring an all-female leading cast including Melissa McCarthy, Kristen Wiig,
Kate McKinnon, and Leslie Jones, one can’t help but take notice of mega-star Chris Hemsworth in the supporting role of Kevin.

In time for today’s #HappyAdministrativeProfessionalsDay, SONY released this special vignette featuring Chris as Kevin, the receptionist to your favorite Ghostbusting team!

Lets just say, we’d hire Chris here at the PPLA offices to bring us bad coffee any day…spit and all. 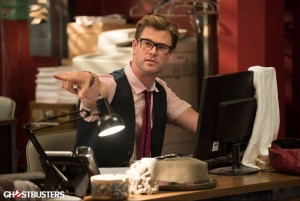 Thirty years after the original film took the world by storm, Ghostbusters is back and fully rebooted for a new generation. Director Paul Feig combines all the paranormal fighting elements that made the original franchise so beloved with  the funniest female cast today. Will you be hitting theaters this July?