The Bay Area mist crept in, as we drove to Petaluma to check out some metal in the corner of wine county where the silent is loud and wine pours freely. ONI, Canadian progressive metal is getting ready for the Knotfest and The Phoenix Theater was one of their victims who witnessed a brutal display of sounds.

Last Saturday, ONI showed their fans why they are being part of the Knotfest this coming weekend. Their debut album Ironshore is coming out this fall, and their brutal video to the track titled- “Eternal Recurrence” is out on YouTube. 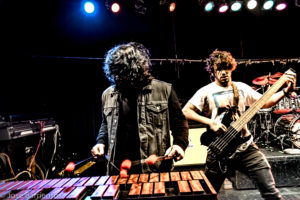 These guys have been busy, and their warm up shows are proving to be a slaughtering of metalheads. Up on stage you see a xylo-synth (Johnny D) with close to 6 pedals and effects board hooked up to it, a killer drum set with the evil image of the ONI a Japanese devil, ogre or creature based on your interpretation. However for the metal purposes that is a devil, evil force that ONI projected on stage with their progressive metal riffs.

Each song is packed with furious riffs, and powerful bass notes (Chase Bryant), that resonate in the walls of The Phoenix Theater, synchronized with the blasphemous sound of the Xylo-synth an instrument never before used by metal bands but giving this band a heavier, more rhythmical sound. Up behind the drums sits a powerful man (Joe Greulich), with the ability to hit blasts and rapid fire at the fans on the double bass pedal and intricate notes. On vocals the agile Jake Oni gores his vocal cords out and partakes in a helicopter head banging that uplifted metalheads’ spirits. There is so much melody coming from both guitars which will propel this band forward and give the band a spot in more tours and possibly headline their own. These guys are metal to the core, and their powerful sound will enamor North American during this coming Knotfest, so make sure you check these guys out and remember to headband to their relentless prog metal. 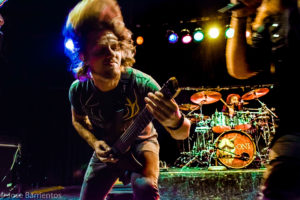 ONI can shred with pro guitarist skills and the bass works as powerful tapping device for Chase Bryant. The track “Eternal Recurrence” was a heavy and fast song the fans loved right away. It is the xylo-synch that makes the band’s sound very different, pushing the limits of metal and giving it that extra creative touch. Both guitarist and xyloist headbanged and punished the listeners ears with their synchronized metal, a sound that will be remembered by the residents of Petaluma, CA a quiet city that was disrupted that one Saturday night by amazing music.