‘The Open House’ portrays a mother and son who are in for a shocking surprise when they stay in a mountainside home that appears to be haunted.

After the death of a Suburban father, wife Naomi (Piercey Dalton) and her son Logan (Dylan Minnette) struggle to cope with the loss of their loved one. Trepidation and unemployment leads Naomi to move them to her sister’s mountain mansion, while the house is being viewed for selling, in a small town community where everyone knows everyone. Upon arrival, the two meet a strange neighbor and a seemingly kind store clerk.

Mirroring the name of the film, during the days that the house is Open to potential buyers, Mother and son are required to leave the home at breakfast time and return after 5pm. It is during this time that unusual things begin to occur and what seemed like a beneficial getaway in a beautiful family home, quickly turns to a series of “what is going on in this place?” Much like your typical horror-mystery film, things begin to go missing, strange noises are emitted from places unknown to the house’s inhabitants, objects that are noticeably in one place are moved randomly, the house’s water supply is also acting strange, and of course the phone rings but no one awaits a response on the other side 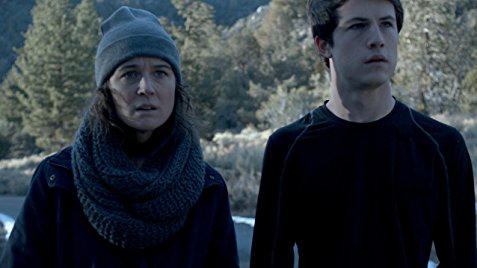 After much confusion, and fear, mother and son call in police forces to check out their suspicions and are informed that all is safe and perhaps they are just paranoid. After all they’re in a mansion in the woods, nature is sure to make its own natural sound…… but who really believes that? Surely not their strange neighbor Martha, who they initially met upon their arrival. It’s then that things turn from strange to outright crazy when Martha alludes to her deceased husband being alive.

From here the plot is sped up and kicked into action as Naomi and Logan try to figure out what is taking place in their home. Confirming the conclusion that they are in fact besieged by threatening forces, arguments transpire, emotions run a muck, and what seemed like an appropriate time and place to deal with the death of a family member proves to be the exact opposite in this action-packed horror film.

The film is streaming now on Netflix.  Catch a Q&A with Piercey Dalton below:

PPLA: What’re some of your feelings regarding your part in this film? What were your initial feelings when you were asked/picked for this role?

PD: I think Naomi is a great depiction of grief. Whenever I questioned any of Naomi’s behavior, I would always come back to the understanding that she was in a state of shock while carrying the great weight of loss and life responsibilities. All she could do to move forward was put one foot in front of another. When I auditioned for the role, I could identify with the grief but I could only imagine having to take care of a teenager at the same time. The reality that this made Naomi incapable of being the mother she would want to be was what really intrigued me.

PPLA: What was it like working with two different directors? Did the style of their directing contribute to the overall production and aid in your role as an actor?

PD: Working with two directors was great and that was largely due to Matt and Suzanne being so much on the same page with each other that either one of them could be giving direction or discussing the character and the vision was always consistent. They were both always on set and knew very clearly what they wanted. I did appreciate having both a male and female perspective to turn to and that helped round out Naomi’s character.

PPLA: How does a film like The Open House resonate with a wide audience? Is there a specific audience intended?

PD: I would say that it resonates with anyone who has gone through a traumatic experience and wondered if they’ll ever come out the other side. For Naomi and Logan, they do not. The Open House is a “worst case scenario” come true and besides being geared toward horror fans, anyone who has ever feared that their life will not get better will have their fears justified watching this movie.

PPLA: What is it like living in Los Angeles after moving from Toronto?

PD: It’s like living on a beach instead of in an igloo. Maybe not exactly, but having been born in Tucson, Arizona and raised in Canada, I do believe my body has been slowly making its way back to its natural habitat of year round heat. I first tried Vancouver, BC where it rains instead of snows and that was great but now I need full time sun. And I love LA. It’s packed full of creative people working hard to make their dreams come true. As far as acting in any of those cities, I think it’s all the same work just different locations. I’ve had more opportunities in LA but I have friends that work enough in Canada so it comes down to each person’s individual path from what I can tell.

PPLA: Biggest challenge while on set?

PD: Being Haunted by teddy bears. Big Bear is a quaint mountain town that is obsessed with teddy bears. They have teddy bear restaurants, gift shops, and houses. The massive house we were staying in while shooting was full of them and I am confident that they kept us in check for filming a horror moving there. I woke up with tiny scratches on my arms, lights went out on me in the shower, car tires were deflated and the list goes on. I can’t say that anyone else agrees with me but I saw the way those bears looked at me every night and it was not cuddly.

PPLA: What is it like working alongside Dylan Minnette, specifically noting his boost in fame following his role on 13 Reasons Why?

PD: I was warned before meeting Dylan Minnette that he was the kindest person on the planet and I took that to be something people say about everyone you’re about to work with. Dylan, however, is in fact one of the kindest people I have ever met and I’m very lucky to have worked with him for my first lead role in a feature. He had just finished shooting the first season of 13 Reasons Why before we started The Open House, so we didn’t know how much of an impact that show would have, but Dylan did talk about how important the subject matter was and how great it was to work on such a role. He was just about to kick it into high gear with his band, Wallows, so his love of music is where most of our conversations lead to. Overall he was an inspiring professional, incredibly funny and a friend on set.

PPLA: How did your involvement in this project differ from that of your previous roles or projects?

PD: The Open House is the widest release that I have been a part of but the way it began was just like any other project I’ve done. I usually work on independent projects with fellow actors or people I’ve met along the way, and that is also how I was asked to audition for The Open House. Matt and I worked on a brutal scene together for a two week acting intensive in Vancouver and Suzanne sat in for one of the classes. It was from that they thought to audition me. In the lead up to the shoot we had lots of time to become friends so by the time the shoot came we were like family. We used my personal vehicle in the movie, we all slept in the house we were shooting in and I took their cats in on days we needed their apartment for LA production. It’s pretty spectacular the amount of work I’ve been able to do with people I know and respect.

PPLA: Favorite part about being on this film and why?

PD: Patricia Bethune, Sharif Atkins, Leigh Parker and Aaron Abrams. Dylan and I had succeeded in creating a pretty depressing world in the house where we shot most of the scenes and whenever one of these characters showed up, it brightened our day immensely.

PPLA: Least favorite part about being a part of this film, if applicable, why?

PPLA: How is this premise unique as a thriller film? What valued aspects does it bring that allow for variation rather than typical constitution of horror or typical thriller movie?

PD: I’d say what makes this horror film unique is that you could take the same story line and call it a drama. The characters and circumstance are so possible in everyday life that I wouldn’t be surprised to read about them in the news. The movie is about being haunted but instead of by the supernatural or a killer with a motive, it’s a haunting by one of the greatest fears; bad luck.

PPLA: Would you do a project like this again? Why or why not?

PPLA: What would you tell your fans about acting dreams?

PD: Keep dreaming and I will too. It’s all possible.