ORANGE IS THE NEW BLACK GETS AN EARLY RELEASE

To the surprise of many Orange Is the New Black fans, season three was made available to stream on Netflix six hours before the original release date. 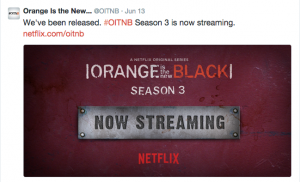 A fan-held event in New York City—Orange Con—featuring OITNB star Uzo Aduba marks the start of it all. The actress video-called Netflix’s CEO Reed Hastings in an effort to beg for the shows anticipated season to be available to stream immediately. Hastings agreed, which had filled many fans with joy. Soon after, this announcement became a trending topic on Twitter.

Although this was most likely planned in advance, the early release definitely helped to generate buzz around the shows premier. Regardless, we can’t wait to see what this season has in store!