You can catch all the official Oscar nominated short films OnDemand or check with the academy for local theater listings in your area!

In the meantime here is a complete synopsis of this year’s nominees: 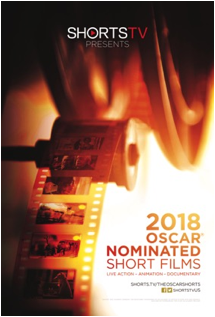 Steven, a mentally unstable twenty something, enters an elementary school with a semi-automatic rifle. After he orders the school receptionist, Cassandra, to have the building evacuated, he holds her hostage and instructs her to call 911. With Cassandra as his go-between, Steven tries to navigate the troubled waters he has entered.

A psychiatrist earnestly tries to help his delusional patient, but his efforts are complicated by the fact that the patient believes himself to be the doctor. With each trying to out-analyze the other, their session spirals out of control.

In 1955, two white men invade the home of Mose Wright, an African-American preacher in Mississippi, to abduct his 14-year-old nephew, Emmett Till, who is visiting from Chicago. Emmett has been accused of whistling at a white woman, and Mose knows that his fate will be sealed if the men succeed in taking him.

Libby, a profoundly deaf four-year-old, is the youngest child in a family who are all hearing. Unable to communicate but about to start school, Libby is assigned a social worker who teaches her sign language. Libby’s skeptical parents are reluctant to be involved, however, and pose a potential block to Libby’s education.

WATU WOTE (ALL OF US)

Jua, a Christian living in Kenya, boards a chartered bus to visit a relative and is uncomfortable being surrounded by Muslim passengers. The bus is stopped by the violent terrorist group Al-Shabaab, whose members demand that the Muslims identify the Christian passengers.

On the eve of his retirement from basketball, NBA legend Kobe Bryant describes his love for the game, which began when he was a young child. From his youthful dreams of glory to his 20-year career, Bryant describes how he and basketball have given each other all they have. His inspiring poem, DEAR BASKETBALL is stunningly drawn to life by veteran animation director Glen Keane and set to the music of legendary composer John Williams.

A luxurious villa and its grounds have become home to amorous, hungry and accident-prone frogs and toads. While they enjoy the bounties on offer, including caviar and macaroons, the amphibians uncover the whereabouts of the villa’s owner.

Lou, the guardian of the lost and found box at an elementary school, tries to teach young bully J.J. that giving to the other kids will make him feel better than stealing from them.

Even though Sam’s father is hardly ever home because he is often away on business trips, he is able to connect with his son by teaching him how to pack a suitcase.

The Wolf from the fairy tale “Little Red Riding Hood” reveals the true and twisted story of his adventures and those of other characters in his world, including Snow White, Cinderella and Jack, the climber of beanstalks. The film is based on the much-loved rhymes written by Roald Dahl and illustrated by Sir Quentin Blake.

In 2014, 96-year-old Edith Hill and 95-year-old Eddie Harrison are married, unconcerned that one is African American and the other is white. The newlyweds are forced apart, however, when one of Edith’s daughters, unhappy about the relationship, forces her mother to leave her Virginia home and move to Florida.

HEAVEN IS A TRAFFIC JAM ON THE 405

Artist Mindy Alper has spent almost all of her 56 years combating severe depression and anxiety, using medication, electroconvulsive therapy and psychiatry to help her. Art has always been her most effective outlet, with drawing and sculpture offering her the tools to give voice to her fears and mental battles.

Huntington, West Virginia, known as the overdose capital of America, sees an average of five to seven deaths from drug overdoses every day. Three women — a fire chief, a drug court judge and the head of an outreach ministry — are attempting to take back their community by using compassion to break the cycle of despair and addiction.

In 2013, restaurateur Brandon Chrostowski is about to launch Edwins Leadership & Restaurant Institute in Cleveland. Aiming to become the best traditional French restaurant in America, the Edwins eatery is staffed primarily with men and women recently released from prison, who have only six weeks to learn the skills that will better their lives and propel the new venture to success.

In June 2015, a 26-year-old African-American elementary school teacher named Breaion King was pulled over by a white police officer for a routine traffic stop. The incident escalated into a violent arrest, followed by a conversation about race in America between King and another white officer while he drove her to the station.