Anyone familiar with Paddington, the polite British bear from the deepest, darkest Peru, knows that while he is friendly with a heart full of kindness (and not to mention a stomach full of marmalade), he does have a nasty habit of finding himself in the oddest of predicaments.

So to make a whole movie based on the classic children’s story is simply quite genius!

The film brings the audience to Peru, to witness Paddington’s humbled origin story of sorts, where he lives with his Aunt Lucy and Uncle Pastuzo. But after an earthquake strikes his home, the bear is sent off to London in search of a new, and more permanent home. 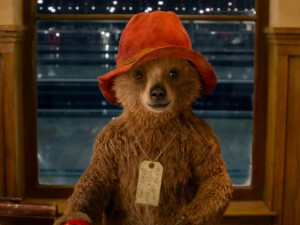 Once arriving in London, he is discovered by the Brown’s, a family clearly separated from each other by their own distractions. When Mrs. Brown manages to convince her reluctant husband to let him stay for a night, they present him with an English name called, Paddington, and promise to help him find a proper guardian.

Chaos, however, ensues when a selfish taxidermist is thrown into the mix amongst all of Paddington’s crazy shenanigans during his stay at the Brown’s, making quite a constant mess of things, in true Paddington style.
The film itself is a collection of stunning visuals, comedic gold, and innocent fun. Everything about it captures the complete essence of the British bear, and brought to life his colorful characteristics in a playful manner.

While the film is set to attract young children, even adults can find themselves immersed in the world that many of them grew up in  and around (seeing as the young bear’s first appearance in literature was in 1958!). The film also teaches a variety of valuable lessons to children going to watch; little things that make up Paddington’s character, and were effortlessly and subtly infused into the film. An impressive feat, for sure!

A reminder to children and adults alike of the beauty in displaying manners to one another, is a lesson this movie excels in. Upon first entering London, Paddington merely seeks nothing more than a home, and attempts to greet people who pass him. Known for rarely calling someone by their first name, and only addressing someone as, Mr., Mrs., or Miss, and giving a slight tip of the hat in salutation are just a few old-fashioned habits the film reminds the audience of. Paddington’s constant doting in saying, “please” and “thank-you” are also good continuations of this small lesson to the audience.

In addition to the excellency in manner-teaching, the film also sheds light upon the goodness of finding acceptance in being different. Often one of the front-runners in themes for films, this British adaptation wears the particular message well, using the obvious difference in species between characters to draw incredible sympathy towards Paddington, and helps to portray him as the lovable bear he is.

As for the other details within the film, once again, the visuals were extraordinarily done, and the London setting created a quaint and homey feel to it, which added another large dose of perfection to the story. Watching this movie has the power to make anyone fall in love with the city of London and the British culture, of course in addition to the titular bear himself.

After seeing the film, it is pointedly obvious that everyone involved had a great time creating it. And when a movie can do that to an audience – being able to convey its messages in a joyful approach and deliver a good and hearty portion of entertainment as well – that makes it a winner in itself. This film is a must-see for anyone seeking a little adventure and pure laughs, though be warned: You may feel an unexplainable desire for marmalade afterwards.