‘Three Dark Crowns‘ glitters with malice thanks to author Kendare Blake. Kendare is well known for her other series ‘Anna Dressed in Blood’ : a horror genre. The horror background our author is known for bleeds it’s thrilling aspects into three young triplets destined for the throne. Or are they? Read on to find out what our top three picks are for the October/November season. 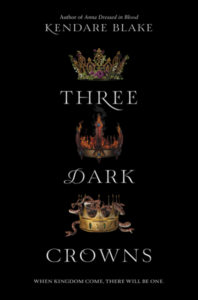 What would you do if you were a triplet with equal power to your sisters? On this island veiled by magical mist; you kill her for your throne. The story follows the three protagonists as they grapple with the impending death of their sisters, at their hands. Reluctance, acceptance, and revulsion are all aspects of ‘Three Dark Crowns’. The series lays a solid foundation with it’s debut novel with solid world building. For actors the chance of portraying Arsinoe, Mirabella, and Katharine is tv gold. Three distinct personalities, and magics make this novel the perfect fit for the CW. It contains all the right amount of deception, miscommunication, and dramatic backdrop the network is known for delivering. ‘Three Dark Crowns’ is currently available. P.S.- The cover is to die for. Don’t miss out on whats sure to be one of autumn’s hottest reads. 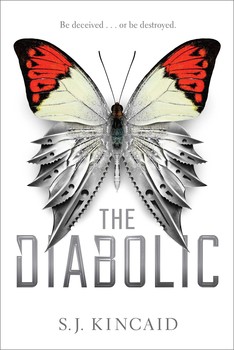 ‘The Diabolic’ was a complete surprise. Approach with caution into a world of such deception and emotional destruction you won’t hesitate to turn the page. Diabolic’s in Nemesis’ world are created for one purpose and for one purpose alone: to kill. Bonded without consent to their “owner” and trained from the onset of their genetically engineered life in all killing techniques, they are the perfect weapon. Capable of rational thought, without remorse, fear, or hesitation they make the perfect bodyguard. Which is why when Nemesis’ owner Sidonia is summoned to the dangerous galactic court her parents send Nemesis in her place. Little do they know the world shattering changes about to occur. Posing as a powerful senator’s daughter and hostage/ward of the court to a mad Emperor is supposed to be impossible to her kind. Or is it? Are Diabolics truly devoid of feeling? You’ll just have to read to find out. This book does not belong on any television screen. The budgets wouldn’t do it justice! Nothing but a full fledged film franchise is good enough for Nemesis, Sidonia, and the whole of the galactic court. S.J. Kincaid delivers a dark look at what happens when human progress surpasses our greatest imaginings only to retreat to educational ignorance.

‘Fate of Flames‘ is our last recommendation for the fall. Written by author Sarah Raughley, and set within our approximate timeline, its a wonderful deviation of our current history. The book changes everything in history going back to the early 18th century when phantoms appeared to ravage our planet. Never let a monster destroy the world without an answer. And we have it: in four brilliant girls known as ‘The Effigies’. Each girl possesses inhuman strength and a magical ability tied to one of the classical elements. ‘Fate of Flames’ mixes a bit of ‘Captain Planet’ and the solid girl power butt kicking of ‘Sailor Moon’ in our modern day society. Our unassuming heroine Maia is a far cry from the name taking, butt kicking Effigies depicted in the news. This shy nerdlet comes into her power after the sudden death of the current Effigy of flames. With more questions than answers at it’s conclusion this is a strong start to a new series. Now where to place it? ‘Fate of Flames’ could do very well on the big screen if done right. More likely we think it would have a strong home on ‘Freeform’ ( formerly ABC Family). With shows like ‘Shadowhunters’ making a splash on the network there is precedence for ‘Fate of Flames’ to make a strong following for itself. Alternatively MTV has jumped into scripted television with ‘The Shannara Chronicles’ making it home to high fantasy. Why not add a young hot troupe of badass heroines? ‘Fate of Flames’ has the potential to be a great long running series. We’re looking forward to the sequel already.