PALEY FEST: JANE THE VIRGIN CALLS ON LATINOS TO UNITE

TV’s breakout comedy Jane the Virgin closed out the final day of this year’s PaleyFest. The show was honored at the annual event held at the Dolby Theater in Hollywood, and Press Pass LA was in the house to share in the laughter (and some tears!) from the cast of the beloved new show.

To kick things off, the audience was treated to a screening of a new episode to air the next day, enticing a wave of excitement from the crowd. Immediately following the episode, moderator Jarret Wieselman, the Entertainment Editor of BuzzFeed, introduced the panelists. Taking the stage were cast members Gina Rodriguez, Justin Baldoni, Jaime Camil, Andrea Navedo, Ivonne Coll, Brett Dier and Yael Grobglas, as well as Executive Producers Jennie Snyder Urman and Ben Silverman.

Highlights from the panel included stories about the casting process, with Jennie sharing that Gina was the third to come in to audition and by then they knew they had found their Jane, as her performance in the pilot episode was the same as in her audition. The cast also expressed their love for their characters – especially Andrea, whose role is reflective of her own family. She is proud and honored to be the face of single mothers, as her own mother was a single mother. Of course, the panel would not have been complete without discussing the show’s Golden Globe nomination and Gina’s Best Actress in a Comedy win. Her fellow co-stars had nothing but compliments of her personality, character and work ethic, causing Gina to shed tears – a common occurrence throughout the event.

When the cast was asked if they could play any other character on the show, the answers varied. Rogelio was a popular choice, but other answers included Andrea wanting to play Petra because “bad girls have the most fun,” while Justin chose “Michael or Sin Rostro.” Rogelio himself had a tough choice, with Jaime torn between Jane’s loves “Rafael or Michael.” Speaking of Rogelio and Michael, the cast touched on the growing bromance between the two characters, who are undoubtedly two of the funniest characters on the show. 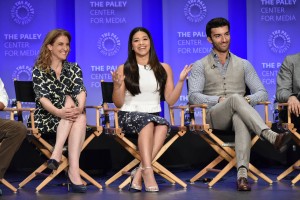 A topic of discussion that came up was tackling major issues, including the issue of immigration. Ivonne spoke out about her character’s illegal immigrant status, saying, “Imam representing a demographic that exists. I put a human face on the hundreds of thousands of illegal aliens who are here who are not criminals [and who] are hard-working people.”

Throughout the duration of the panel, the cast also took the opportunity to discuss Latino culture on TV. Gina summed it up best, stating, “We need to unite. They see us as one community [and] we need to be one community. Let’s do that, use our power as Latinos, whatever culture you identify with and celebrate.”