This weekend we got the pleasure of attending the Empire panel at the 2016 Paleyfest for the Paley Center For Media, and it did not disappoint. Held at The Dolby Theater in Hollywood, home to The Academy Awards, the creators, producers, and cast of “Empire” took to this legendary stage to discuss the huge success of this outstanding musical drama.

The evening began with moderator Kevin Frazier taking the stage to announce the night’s panelists. However before the panel began, the entire theater got to watch a premier screening of March 30’s episode “Death Will Have His Day.” Now, we can’t tell you much, but we can say that the return of Empire will be epic, and not something that you will want to miss. 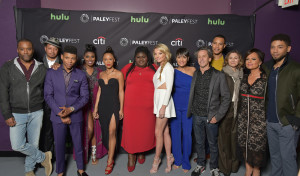 Sadly, fan favorite Taraji P. Henson, aka “Cookie Lyon” was not in attendance, as she was shooting a film in Atlanta, however all of the the other stars of our favorite nighttime soap were there, ready to discuss the phenomenon that is Empire. The panel included Terrance Howard, Jussie Smollett, Bryshere Gray, Trai Byers, Grace Gealey, Kaitlin Doubleday, Gabourey Sidibe, Ta’Rhonda Jones, Serayah, Lee Daniels, Ilene Chaiken, and Brian Grazer. While Cookie was dearly missed, the rest of the cast and crew were so much fun to watch, and had such fascinating input about the show, that the panel was still an absolute blast to attend.

Empire has broken racial barriers and boundaries left and right, and many people wanted to ask creator Lee Daniels about diversity both on and off the camera, and his opinion of diversity in Hollywood. His answer may shock you, but it was honestly the best answer he could have given. Daniels said, “I don’t have time to deal with racism. Am I delusional to think there’s no racism in America? Look at f**king Donald Trump. But here’s the bottom line: The minute I embrace it, it becomes real to me. I don’t have time to blame Paramount or Sony or Fox. I get my own money, I get my own actors, I write my own script. I don’t want to hear, ‘Woe is me, they don’t treat me right.’ Get off your ass and do it. You’ll always be an outsider because of the color of your skin. This is the way of the world. So kick the door open and don’t take no for an answer.” One of the reasons “Empire” is so successful is because yes, it is a diverse show, but it attracts audiences of all races and genders all around the world, and that is what makes it so special. 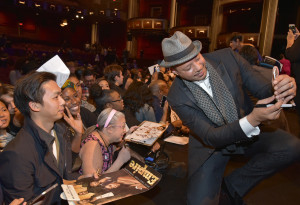 When asked what other special guest stars they would like to have on the show, Gabourey Sidibe,Ta’Rhonda Jones, and Serayah were all about Rihanna and Beyonce. Daniels said possibly Adele and Kendrick Lamar, and the hilarious Terrance Howard said, “I found out today that O.J.’s gonna be at the premiere. Sorry. I’m just wrapped up in that O.J. show.” It was actually Terrance Howard’s birthday on the night of the panel, so he was in a great mood ready to have fun and joke around, which was a blast to watch.

The cast and crew of Empire have nothing but love for each other, and you can tell just my their demeanor and interactions on stage. In fact, Gabourey Sidibe even said that going to work was like “going to high school, if you really liked high school.” We cannot wait for all of you to see the shocking return of “Empire” on March 30th, and for all of us to see how the rest of season two will unfold!