Press Pass LA was absolutely delighted to attend the Scream Queens panel at Paleyfest this weekend, and it was even better than we could have ever expected. They gave us so much insider info and leaks for season 2, that we were literally squealing in our seats with joy over what is to come.

In attendance was creator Brad Falchuk, Emma Roberts, Jamie Lee Curtis, Lea Michele, Billie Lourd, Abigail Breslin, Keke Palmer, and Niecy Nash…talk about a strong female cast! You can tell that these women truly loved working together, and support each other in every way, which is always refreshing to see. 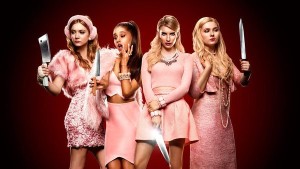 The Chanels will be back for season 2 of Scream Queens.

We already knew that season 2 of Scream Queens would take place in the hospital the three Channels were left in at the end of the first season, but not much else. In addition to finding out all of these women would be returning in their original roles, we also found out what is going to be the driving force behind each of their characters.

The Chanels (Roberts, Breslin, and Lourd) will still be in the mental hospital, but now they will be studying under their former nemesis Dean Munch (Jamie Lee Curtis). After traveling the world and writing a best seller, Dean Munch bought the mental hospital and is now running it as she sees fit. As far as Hester (Lea Michele), we probably got the least amount of info, but we do know that there will be a murder in the hospital and she will be intimately involved. Zayday (Keke Palmer) will have graduated from Wallace University and is training to become a doctor under the supervision of Dean Munch. Denise (Niecy Nash) is now a member of the FBI, and will cross paths with the other characters to help with the investigation of the new murder. Falchuk also told us that Glen Powel will be back to reprise his role as “Chad Radwell,” and three new male characters will be cast, that are characterized as “studly doctors.”

Falchuck also revealed that unlike “American Horror Story,” which uses many of the same actors to play different roles in a different story every season, Scream Queens will be different. Like the “Halloween” franchise that has had so many sequels we can’t even count, the Scream Queen franchise is going to do something similar. Also, it is taking a page from the Halloween playbook with the hospital storyline, which was where four of the movies took place, and of course, starred Curtis.

We don’t know when Scream Queens season 2 will premiere, but we do know that it will now be filmed in Los Angeles, instead of New Orleans, and we will be getting more casting information soon!