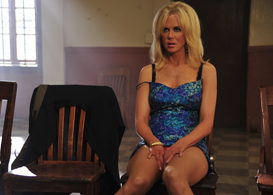 Sexy! Steamy! Provocative! Dangerous! Prepare yourself for The Paperboy, you will definitely need a cold shower after seeing this film. The sizzling movie directed by Lee Daniels (Precious) set in the swamplands of the south in 1969, is truly an intriguing tale.

The story is one of sex, violence, racial injustice and seeking the truth. The always hot Matthew McConaughey plays Miami Times reporter Ward Jansen who returns to his hometown of Lately, Florida with his writing partner Yardley Acherman (David Oyelowo) to pursue what they think will be their career-making story. Violent swamp resident Hillary Van Wetter (John Cusack) claims to have been framed for the murder of a corrupt local sheriff. The two reporters were informed of Mr. Van Wetter’s case from sexy, local death row groupie, Charlotte Bless (Nicole Kidman). Bless has been carrying on a steamy long distance relationship with Van Wetter, whom she has never met, while he is serving his time. Jansen recruits his younger brother Jack (Zac Efron) to be his driver and the group starts researching the crime in hopes to prove Van Wetter’s innocence.

As the group becomes closer, the Jansen family’s longtime maid Anita (Macy Gray) takes notice that young Jack has become quite obsessed with Charlotte. Ward’s investigation explodes open a world that entangles the entire group into the mystery, deception and lies of the Florida swampland.

I loved the performances in this film. Fans of Efron will definitely not be disappointed! This film is unlike anything he has been in before and will be hard to top. I was surprised how much I enjoyed Macy Gray’s performance. She is the grounding force in The Paperboy and she delivers a strong and believable performance as the family confidant. Nicole Kidman has never been sexier! She blew me away with how far she sexed up each scene. I was slightly worried based on the trailer about the love scenes between Efron and Kidman, but was happily relieved to see how tastefully done they were and that most of it was implied and not shown.

The Paperboy is definitely not for the faint of heart. It is full of shocking and disturbing imagery that left me thinking about it days after seeing the film. Be prepared for a rape scene intercut with sequences of swamp animals, blood, sweat and a raunchy sex fueled scenes. Although I loved the performances, it was very difficult to make an emotional connection with the characters. A lot of the most meaningful moments of the film were told through voice over, where I believe seeing the action would have made it more powerful.