NBC’s hit drama Parenthood has been on the air since 2010 and has since become one of TV’s most beloved shows. Now, in their sixth and final season of the series, Parenthood recently celebrated their 100th episode. To celebrate the big milestone, they had a cake cutting celebration and Press Pass LA was in the house to celebrate and catch up with the Braverman clan!

The milestone event took place at the Parenthood stage on location at Universal Studios. Front and center in front of Adam and Kristina’s house boasted a giant, lush green family tree-themed cake, courtesy of The Butter End. Looking too-good-to-eat, the cake also featured photos of all the cast members as their characters on the show.

We caught up with creator Jason Katims on-location and talked about what he thought makes the show the success that it is. “We have an amazing cast, a great group of writers throughout the series and I also feel like our process is unique. It gives the actors the freedom to overlap and respond to each other in the moment. It helps to lend itself to the show feeling real. What I love to hear is when people say, ‘The Braverman’s are like part of my family.’ They really take these people on as their friends or part of their family. Our process lends itself to having people respond to that.”

While this season is the final one of the show, there is still more story to be told for the remainder of the season. When asked what fans can expect from their characters for the rest of the season, Craig T. Nelson said, “Just more of the same. He’s going to stay contentious and emotionally involved with the family. We’ll see what happens – he’ll be there.” Erika Christensen teased, “There are six more episodes, and you know how much can happen in just one episode – so much is going to happen.” Sam Jaeger added, “Nothing’s easy with Joel and Julia. I think we’ll see that Joel has put himself out there and Julia’s still dizzy from his profession, proclamation, whatever… I think we’ll see Julia struggle with where she stands because it’s clear now where Joel is.” 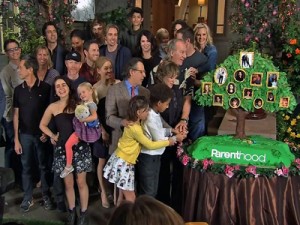 It’s no secret that one of the major factors in having such a successful show is support and love from the fans, something that the cast is fully aware of and doesn’t take for granted for a second. When talking about their fans, Monica Potter would like to say to them, “Thank you, thank you, thank you, thank you for supporting us and opening your mouths, raising your voice and letting us hear you… I just love them. I love the feedback, I love that they get mad about certain things. We wouldn’t be on TV without them.” Erika added, “Thank you for your insane tweets and all the emoticons and for watching and for spreading the word… Thanks for watching, because we’re still here! There have been a lot of times where people thought maybe we wouldn’t be here – we still are!”