What started out three years ago as just an evening of French music at Julia and Jacob’s local synagogue cafe turned out to be the beginning of a new venture. “I saw the huge response, then I did about five of those evenings then thought wow this is really striking a chord,” says producer and vocalist Julia Kantor. “I wanted to start a full band and get this out there in a big way.”

That’s when Paris Chansons formed to be the successful band they are today. As Jean-Louis Darville describes they are the perfect mix- like the four musketeers. “As a Parisian, I bring the real genuine French part, Julia brings the beautiful voice to all the songs, Max brings the warm side of French tradition as he comes from the Moroccan side of France and Jacob which brings the Russian part,” says Darville.

At their latest show last month “From Paris with Love” the band gave an outstanding performance to a sold out crowd at the Catalina Jazz Club. With a mixture of their original songs and classic French covers they have found a perfect fit for any audience. As each singer chooses their songs for their particular niche. “It is our intention whatever we perform, to make it our own,” says Kantor. “Even if we are performing a song that’s famous, we want to do an original written version as much as possible so it’s fresh.” 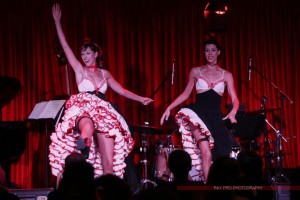 You know it’s a great show when the audience sings, dances and cheers from the tip of their seats. Vocalist and Actor Jean-Louis Darville even incorporates props and audience participation during several of his songs. The show was full of surprises with a special performance from the French Cabaret Versatile dancers. As a first time attendee Rafael Nadal says the concert reminded him of the time he lived in Paris. When asked what he thought about the show, Rafael said “I thought this was from a scale from one to 100, I give them 101.”

What’s next for Paris Chansons? For anyone outside of Los Angeles, keep your eye out for this band as they aspire to perform beyond Los Angeles, nationally and internationally and corporate events. Catch their next show “Autour du Monde” (Around the World) on December 1st, the band is playing at the ultra chic Rivera 31 inside the French hotel the Sofitel in Beverly Hills.