PARTY DOWN SOUTH IS BACK AND TAKING OVER ST. PETE, FLORIDA!

The original cast of “Party Down South” is back and reunites for the fourth time! This year the group will take over St. Petersburg, Florida, for a 10- episode season.

The Party Down South screening took place at the Attic in Hollywood August 13th. If you weren’t present then you missed out on all the craziness. Party Down South is a group of eight young southerners who live together in one house filled with adventure, partying and drama. Their screening started out with a teaser, full premiere, introductions of the cast and closed with a wild, crazy and exciting Q & A.

I had the chance to sit down and catch up with the beauty queen of the bunch, Mattie. She is known as the sexy, crazy, and always quick to speak her mind, party fanatic! Mattie describes how being on this show has changed her life. The casting directors noticed her while she was partying at the Beach Party Mullet Toss in Orange Beach Alabama. “I was in my own element, just being me dancing on three speakers high wearing a horse hat with nothing but my bikini on and the casting directors approached me” said Mattie. She says that they were done doing castings for the show but they wanted her. “ I was at the right place at the right time, and this show has changed my life” said Mattie. 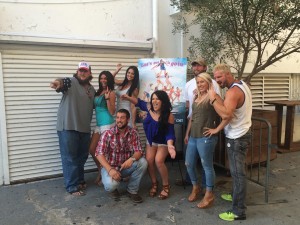 Growing up for Mattie, being 6’3 with heels, wasn’t so easy. Her height was something she struggled with. “I’m tall. Get over it, if you don’t like this then there’s a thousand other bodies to look at” said Mattie. There is a dark side to Mattie who is known as “Martha”. Mattie says that “Martha” comes out to play when she is drunk especially off of Patron. “Martha can get very crazy and violent, she is built from my past” said Mattie. Mattie shared that she is working on her drinking and that she accepted who she is a long time ago.

We got the dish from the cast during the Q & A:  Murray and Daddy have a sexy body contest and decide to take their shirts off for the fans! Tiffany and Hannah have gotten over the beef they had with one another and are now pursing a friendship. Tiffany and Walt say there are rumors about the two being a couple, and revealed that they might just give America what they want 😉 Lauren admits to Walt that he was right about her ‘douchebag boyfriend’ and apologizes about her angry possessive behavior towards him on the show. Walt and Murray are known as the “Terrorist Twins” because they enjoy harassing people and getting under people’s skin. And rumor has it that Lyle is married!

Be sure to tune in to the new season of Party Down South airing Thursday August 20th at 9/8c. Party Down South, ranked #1 on CMT, is ranked as the highest rated and most buzz-worthy original series this year. Be sure to tweet your favorite cast member using the hash tag #PartyDownSouth.