“Party of Five” was a staple of 90’s culture right up there with “Friends,”and “90210,” which lets face it… is responsible for its existence.

The reboot for “Party of Five” has found its leads with: Brandon Larracuente, Emily Tosta, Niko Guardado, and Elle Paris Legaspi. The series is set to premiere on Freeform and will be full of unexpected twists according  to its showrunner. The potential series, currently in the pilot development stage, is described as a modern twist on the original that follows the five Buendias children as they struggle to survive together as a family after their parents are deported to Mexico. The quartet take on the roles originally played by Matthew Fox, Neve Campbell, Scott Wolf and Lacey Chabert. The fifth sibling like the original will be played by a baby. 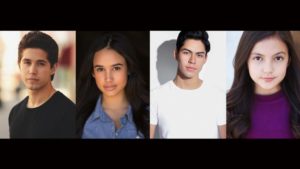 The good news for hardcore “Party of Five” lovers is the pilot was co-written by the original series creators, Keyser and Lippman, alongside Michal Zebede (Castle) for Freeform. They will also executive produce alongside director Rodrigo Garcia. The new “Party of Five” hails from Sony Pictures Television, which also produced the original.