What a Party! San Antonio Jams Out for Thomas Henry Jr.

The star-studded birthday affair for Thomas Henry Jr. was held at the radically transformed Hotel Discotheque lounge in San Antonio this past weekend. As in usual tradition with the Henry’s decadent celebrations, art, fashion, and celebrity performers were just a few of the innovative elements of the opulent affair, which was produced by television-acclaimed, celebrity production designer Dylan Marer. 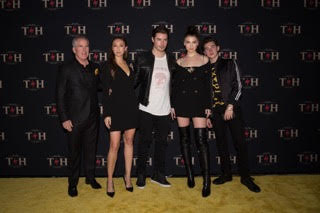 Marer and his team from Hollywood transformed the venue to transport guests to a modern Gatsby-esque world all its own, complete with floor-to-ceiling decor, art installations, aerial performers, burlesque showgirls, provocateurs dancing in birdcages, and contortionists swimming in oversized martini glasses. The venue boasted a cigar and whisky lounge and a one-of-a-kind ice bar experience. Guests were treated to a carefully-curated tasting menu which included a lobster and caviar bar while world-class mixologists prepared whimsical libations. In classic Gatsby fashion, the champagne flowed all night.

The Henry family are no strangers to elaborate, star-studded bashes. In 2016, the $6 million Quinceañera they threw for their daughter Maya was a viral sensation. They also sponsored the 2016 Apollo in the Hamptons event at Ron Perelman home, the 2017 Republic Records Grammy afterparty, and the 2017 Maxim Super Bowl party.

The patriarch of the family, Thomas J. Henry, is an attorney and philanthropist from Texas. He is the founder of Thomas J. Henry Injury Attorneys, a national personal injury firm. He has been featured in Newsweek Magazine, Parenting Magazine, Forbes, and Fortune for the record-breaking multi-million-dollar awards hard-won for his clients.