THE PASSAGE POINTS TO THE IMPORTANCE OF THE PANAMA CANAL, SBFF DOCUMENTARY

The Panama Canal isn’t just a waterway that separates North America from South – it’s so much more – and documentarian Alexander Douglas unveiled his newest film, The Passage during the recent Santa Barbara Film Festival to prove this point.

The Panama Canal is not only  important as a key conduit for international maritime trade, but it also highlights a conundrum of global ramifications.  In our ever changing World, how does one face the unbearable gluttonization of necessary expansion, when faced with an ever-impending personal quietus? Douglas sets out to educate viewers on the importance of the Panama Canal as the primary shipping route for World trade which crosses between the Atlantic and Pacific oceans, while also providing vital economic strength to it’s mother country.

Through a series of chapters focusing on aspects of day-to-day life in the coastal region of Panama & its surrounding areas, The Passage profiles various aspects of the formation and continuation of the Panama Canal that has become helpful in both sustaining life for the Panamanian peoples, while curiously leading the country to a untimely demise of necessary evil, that may not only effect the home country, but the rest of the World.

Initially, the film as an idea, doesn’t appear to have much more to speak on than say, a 60 Minutes special. However, Douglas manages to transcend this thought to form a compelling spotlight on how important the Canal actually is here, primarily through the means of juxtaposition within Panamas’ cultures. Between urban & rural dwellers, poverty-stricken citizens & government officials – Douglas captured over a year’s worth of interviews, to cast a wide net of resources and extensive footage in unveiling a message that, no matter how wide the separation-gap is, each and every dweller to live in and around the channel are prime for being a beneficiary or victim of its life-force. Furthermore, just how fragile that balance lies in the hands of the few that distribute the growing power of economics and politics.

To set his story in motion, Douglas doubled as cinematographer here and we should all be thankful. Through picturesque photography and ambient flowing underscore, The Passage has a balletic quality of energy and movement that will entice and engage; there are some lively montages that, were they not the (sometimes) shocking images which take in the many slums and fringe living conditions in Panama, but more of the sunny-side-of-life, well – people would probably book their plane tickets now! But, one does have to hand it to the director here for unveiling the more audacious views – they might not always be the prettiest in terms of appeal, but they are the more authentic choice. 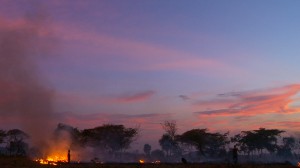 While The Passage is beautifully engaging to view and short in its 58 minute time length, the crux is that there are no answers here to be had, and perhaps this is Douglas’ message. Everyone involved in the state of affairs in Panama are aware that the Canal has an important responsibility attached to its management, but no one is certain as to what they should do with that power, and more importantly, who should own that power. Douglas reminds us that the World shouldn’t dismiss those smaller countries as something of fledgling bystanders, but forces which have the ability to effect the World economy and that we all have a responsibility to ensure not just sustainability in our own back yards but the interconnectivity of the World around us.