PATTON OSWALT’S “TALKING FOR CLAPPING” SPECIAL WORTH A LOOK:

Patton Oswalt’s new comedy special, Talking for Clapping opens on an upbeat and laughable note. Netflix audiences are brought into the special with Oswalt talking about how he’s going to open the special and different scenarios that would be great for opening the hour-long comedy special.

His brash and blunt friend says what EVERYONE who watches a comedy special thinks, “Just get to the damn special… start the f***ing special, NOW!” This could not be any further from the truth. I mean come on comedians, we know you are funny, that’s why we are taking time out of our lives to watch you. It’s a comedy special not a movie, so there’s no need to set the scene, just make me laugh! 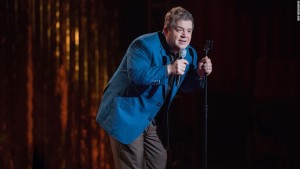 Patton Oswalt takes to the stage in his latest comedy special for Netflix.

Like I said, I started laughing right off the bat because of the realness behind that captivating opening scene, but sadly I found myself semi-chuckling throughout the rest of the show. There were definitely notable parts to this special that had my sides aching. Patton talks about how coffee shops are the capital for the “snappy answer for the completely reasonable question.”

Patton: “Hey, can I get a cup of coffee?

Coffee Shop:  “Well it is a coffee shop.”

This is a great topic audiences have all encountered, can relate to and laugh about. Another one of his bits goes into how doctors cater to older women when it comes to prescription pills, because women “tend to complain” and those special pills work on subsiding the complaining. That was, for me, the last semi-relatable set in the special.

I’d recommend Talking for Clapping for anyone in their early to mid-thirties and older. Patton is a father, husband and businessman, and a good portion of this special goes into such topics. If you’ve never heard of or watched “My Little Pony” well then you’re in for a good 10-minute crash course on the characters and plot.  This special is based around mature content, and I mean that in the sense that it isn’t slapstick humor, he doesn’t tell “P” and “V” jokes nor does he take a trip down drunken debauchery lane. Like a plethora of comedians do, Oswalt talks about real life situations everyday people encounter, trials and tribulations the world is facing in today’s social climate and adds humor where there is darkness.

Talking for Clapping premieres on Netflix this Friday, April 22nd.