Press Pass LA is sponsoring  “An Evening of Short Scenes” featuring the talented work of the actors of the Paul Currie Actors Studio this Tuesday June 17th at the exclusive members only club Soho House West Hollywood.We sat down with one of the actors from this studio, Dawn McElhare, one of the longest running members of the class and the studios coordinator, to talk about what makes this group one to watch.

The class which meets weekly, is led by Australian Producer- Director Paul Currie (Lighstream Pictures).  Paul is best known for his films Rampart, Max Rose, One Perfect Day and is currently on location in production on The Moon and The Sun starring Pierce Brosnan, William Hurt, and Ben Walker which was recently featured in Variety.

The format of the class aims at a truthful exploration of humanity through acting with real on set applications. Sessions focus both on performance and on the technical aspects of filmmaking like hitting marks, working with  different camera setups, and more specialized skills like working with stunts, choreography, and more.  The class brings in guest teachers- directors and casting directors- and these have included Daniel Noah, Gil Junger, Michael Sarna, Mike Makara, Hitoshi Inoue and Deb Aquila to name a few.

PPLA: Tell us about the recent project the Paul Currie Actors Studio undertook.

DM: We were presented with a space and an opportunity to take our work outside of the classroom. Knowing Paul would be in production on The Moon & The Sun soon, we had a limited window in which to make this project work. We then decided to take a look at our reels and had do be honest with each other about our business strategy and how we were presenting ourselves. Everything sort went from there. As a class we picked scenes which would best showcase each actor, then categorically planned and worked towards producing a series of shorts. We had a month to prepare all aspects of the shoot including rehearsals. We explored locations, locked in a crew, and set deadlines. Once we had the completed work, we thought it would be a great opportunity to hold an evening to share and present the work. We held our first event at The Hesby in North Hollywood for close industry friends  and it was a big success. As a followup, we planned to tackle an  event geared toward industry guests with the hopes of having it at Soho House. This is now about to come to fruition. 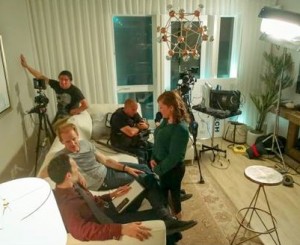 PPLA: How is the Paul Currie Actors Studio  different from other acting spaces and workshops in Los Angeles?

DM: I think the above speaks to that question. The fact that the Paul Currie Actors Studio is so much more than just an acting class. I think the goal, in this space–at the moment is to really bring all aspects of film together. Actors working side by side with writers, directors, and crew, to communicate in a way where we are all learning the language of film. It becomes a space where knowledge is shared between departments, and all begin to explore new ways of working together for the betterment of the team, prior to even stepping on set. I have been involved in this class and worked with Paul in this space for three years now, as have many of his students, and what I really enjoy is that it is ever changing to meet the needs of the students and the industry. All the while- with Paul as our teacher- he is encouraging and empowering us to be the best, dropped in, grounded actor, by way of human being, that we can be. And all of that is revealed in the work. I think that fact that most of his students only leave to film industry work says a lot about the community he has built.

PPLA: What do you hope to achieve through the work generally and showcasing this particular shoot?

DM: Anyone who has met and or worked with Paul cannot help but get inspired. While I am and will always be an actor at heart, I am personally using this experience and space to fine tune my producing skills and I love it. It’s not like someone taught me how to do this. If I am going to fail I trust that this is a safe space to do that. But I am open to those around me, and I have learned to ask for help in order get things done. In this experience, like other times before, I recognize it is so important to surround yourself with like-minded folk and crew. For me that makes all the difference. A happy crew makes for a good shoot–even when it is an 18-hour day. Best case scenario for this shoot was to have everything in place thought of ahead of time– with all the planning and preparation established. When all that happens prior to shoot day, and the cameras start rolling and Paul calls action, all that other garbage just disappears. When that happens and people are in a comfortable enough space, simplicity and the magic in the work appears. In showcasing these scenes, we hope to call attention to the work this talented group is doing and create opportunities for professional work.

PPLA: Why is taking control of your career and creating your own work and opportunities so central to this groups way of training? 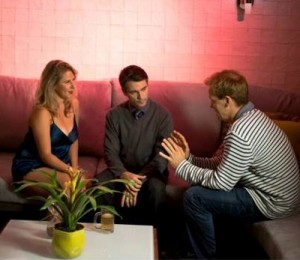 DM: We’ve all heard it before, but no one is going to come banging down your door. Best case scenario is to find a tribe of good working like minded folks, to blaze your own trail with who will push you to be better and stay in the game. Continuing to do the work, training, and being prepared to jump in when opportunity presents itself is key.

PPLA: How do you feel that technology and the industry are changing and how can a group like this find opportunity in those changes?

DM: There is a recognition that this industry is changing, and has changed quite rapidly over the last several years. The money that people have made from commercials is no longer guaranteed. Every prime time network show has lead name actors who have established careers. The window is getting smaller and smaller for unrecognized talent. This is the 2nd Paul Currie production done together as a class. Both of these class projects were pretty ambitious. With social media as it is, there is no reason actors should not be taking control of their careers and  producing their own work. No one talks to anyone anymore. Peoples heads are always buried in their phones. We can get mad that this is the way things are now, or we can choose to look at life as is and recognize how we as actors can capitalize on the realities of a changing world around us.  Technology is allowing filmmakers to take control through platforms like Kickstarter, Indiegogo and more and we should be embracing these opportunities.

PPLA: What sets this group of actors apart as a group and as individuals?

DM: As a group–There is a strong sense of consistency and commitment of the students, with the majority of the class having been involved in the Paul Currie Actors Studio for more than a year and some as long as three to four years. I think everyone has recognized the quality of what Paul brings as a teacher and a leader. As far as individuals– we sometimes all work the same scene in class. When working in this manner we find that it is not a competition who can do it best. It really becomes rather a practice in recognizing what makes each of us unique. How can we peel all the other layers of bullshit away to then reveal our most grounded, honest level of our own humanity. In working with Paul, I think we all value that core space of each individual and that is where we look to work from.

PPLA: What message would you send to other actors trying to make in in the biz or to agents/casting directors looking for fresh talent?

DM: Keep doing it. There are thousands of metaphors, books, or mantras, or ways that work for people. I think ultimately it is a decision. Just do the work and keep showing up. Do what feels good. If sitting on your couch watching reruns of old shows feels good, then do that. But if there is something more you want, find a way. Connect with the people who will help you to always be your best, who expect great things from you and continue to encourage you to feed and sustain that passion. Now I’m not sure, but I’ve gotta believe, for myself, that drive coupled with hard work–in time–good will come. 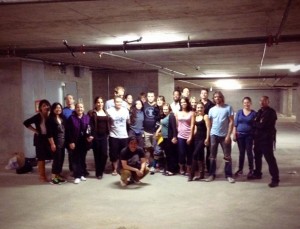