PAUL MCCARTNEY AT DODGER STADIUM, OUT THERE 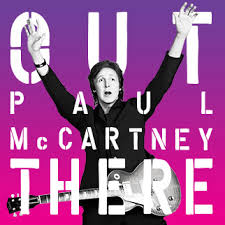 Paul McCartney, musical god of the Beatles and Wings fame played to a sold-out crowd of some 56, 000 Angelenos at Dodger Stadium under a serenely brilliant supermoon on Sunday night. The last time the former Beatles front man appeared on that iconic stage, the year was 1966 and the Fab Four only played a thirty-minute set, as was common for them at the time. Before he took the stage on Sunday, the troubadour promised a much longer set this time around and man, did he deliver. The seventy two year-old rock star played a near three hour set without a so much as breather. The legend rolled from hit to timeless hit.

With a career that spans five decades, McCartney seemed to be aging in reverse. Fresh as ever, Sir Paul was even acting downright silly as he shook his rear-end for the screaming ladies in the crowd. “There are a few people here in the audience who were here in 1966. Come on, girls. Let’s hear the screams” he joked. Sunday’s show was just part of his worldwide Out There tour, which reads like a celebratory journey through musical history with a mix of Beatles and Wings classics and a batch of new songs off his 2013 album, appropriately entitled New. It was truly a thrill to catch a glimpse of this humble genius, a living legend at work.

“I’m just going to take a minute to drink it all in” the singer-songwriter reveals as he looks up graciously at the crowd eagerly amassed to see him perform. After a grounding breath, McCartney kicked off the show with rocking versions of the Beatles staples, Eight Days a Week and All my Loving that immediately got the crowd up on their feet.

Not only can Sir Paul can bring down the house with his rocking tunes, but he also undoubtedly possesses the ability to level the audience with his heartfelt ballads and tributes. “This one is for Linda”, he announces as he starts to play the first tender notes of Maybe I’m Amazed, an homage to wife Linda McCartney, who passed away after a battle with breast cancer in 1998. He also saluted his former Beatles band mates, John Lennon and George Harrison with the somber Here Today and whimsical Something.

On top of all of all the countless hits that McCartney has already shared with the world, he still has more to share. Things have really come full circle for the musician-extraordinaire, his catchy rocking new tune, Queenie Eye is about a game he played with his friends as a child in Liverpool. Even the audience members in the last rows could plainly see just how much fun the former Beatle was having playing his new songs and old. Like the fabled fountain of youth, McCartney embodied of child-like exuberance on Sunday night.

As the evening started to wind down, the rock legend was only warming up. McCartney brought out the big guns as Dodger stadium sung out in unison at the top of their lungs with lighters in hand to Let It Be and Hey Jude. A symphony of fireworks then lit up the clear night sky and fifty-six thousand fans shared a truly unique quasi-spiritual moment together.

Sir Paul McCartney revealed on Sunday night that he is master of the past and present of rock n’ roll and emotional, aching ballads. He has endured unimaginable highs and lows in his truly remarkable life and he is the stronger for it. Reflective and full of joy, this icon of modern music taught us on Sunday night that we must embrace the past, but also live in and love the present moment. Sunday night’s show was not just a truly spectacular performance, but will be for me, and everyone lucky enough to be there, a memory truly treasured forever. 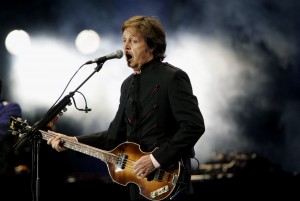