Paul Stanley brought soul to the Roxy in West Hollywood, with the debut performance of his coalition, Soul Station.

Soul Station, which consists of some of the best touring musicians and session players around, paid reverent tribute to the American song with a set of R&B classics.

Stanley started the night off with The Temptation’s “Get Ready,” which was followed by The Delfonics “Lala Means I Love You.”  You could tell he was having as much fun as the audience, as he covered Smokey Robinson, Al Green and The Stylistics, among many others. 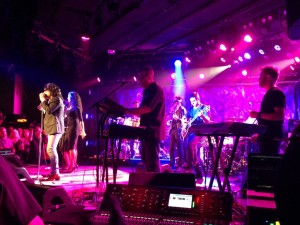 A few of the standout moments were the killer guitar solo by Rafael Moreira on “You Are Everything ,” and Crystal Starr, Ayana Layli, and Nelson Beato taking the vocal spotlight on the Jackson 5’s “I Want You Back.”

For the encore, he brought out a horn section, further crowding the already full stage, but bringing a tremendous sonic boost the the night, finishing off the night with The Five Stairsteps “Ooh Child,” followed by immediately recognizable hits “This Old Heart of Mine,” and “Could It Be I’m Falling in Love.”

The first ever Soul Station show was filmed for eventual DVD release, and Stanely did promise the crowd that he would be back.