By the time 1891 Victorian London rolled around the British goth/horror literary scene was like Seattle grunge scene 100 years later. There were fake monsters like the one created by Dr. Frankenstein, and real ones murdering prostitutes. 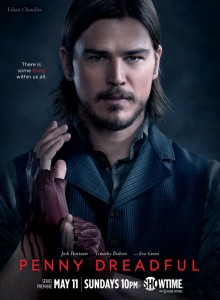 Producers John Logan (Skyfall) and Sam Mendes (Skyfall, American Beauty) have tapped this and more to create their own ‘Penny Dreadful’s’ for Showtime. In the first two episodes the current James Bond team has done some name dropping, with Victor Frankenstein (Harry Treadaway) finding work helping out a former Bond (Timothy Dalton) and his enigmatic partner Vanessa Ives (Eva Green – former Bond girl) with a rather unusual autopsy.

Sir Malcolm Murray (Dalton) is searching for his daughter Mina who was taken by creatures resembling vampires, though that word is yet to be invoked. The pair also enlists the help of a skeptical American sharpshooter named Ethan Chandler (Josh Hartnett). Also brought to life is the sensual Dorian Gray (Reeve Carney), who along with eternal life makes his living with bawdy photography. There seems to be more to him, much like Eva Green’s Vanessa character, who literally takes over what should have been a figurative seance that freaked out an entire party of London’s elite. You haven’t heard language like that from a possessed woman since Linda Blair in Exorcist. Hmm, maybe she was taken by her also witch-like Morgana character from the short-lived Camelot series, but that would be typecasting.

It is a creepy, off-putting world created here. Off-putting because the setting is in the natural, grounded world we know but with an undeniable undertone of evil and violence. The first episode has a scene with Vanessa Ives and Ethan Chandler where she literally lays her cards out on the table and explains to him, to the best of his ability to grasp, what he has gotten himself into. It is an excellent scene where we learn more of the mettle of the two. This scene is mirrored a bit in the second episode when Ms. Ives meets Dorian Gray at the seance and he lays his cards out for her, and we learn a bit more about his ability to mesmerize. A very dangerous flirtation.

That is what makes this a worthy horror series. It has the scares, the jumps, the gore, the disturbing mythos that cites ancient unknowable evils. There is also great dialogue and fascinating characters aside from the ones created over 100 years ago. The aforementioned seance was one of the more disturbing scenes I have seen in a long time, and I’m a guy, a bit like Sir Malcolm, who seeks out the most disturbing. 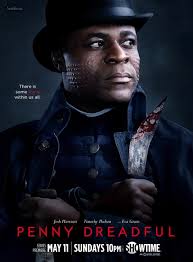 The evils from this story are taken from a myriad of directions and legends across the 19th century and before. Creator John Logan does not seem to be too concerned with timelines, after all penny dreadfuls covered most of the 19th century, Frankenstein was published in 1818, 73 years before these events, there is also the as yet published Dracula by Bram Stoker (1897), though The Picture of Dorian Gray by Oscar Wilde is right on at 1890. Why do I mention Dracula? Who else could have kidnapped Mina Murray? Like Grimm, the power of this show will be how it builds the central characters into the overall mythos, mixing them in like an alchemist to create a new story. Grimm has done an excellent job at this. Penny Dreadful, having the freedom of being a Showtime show is capable of much more.