Perez Hilton celebrated his 38th birthday with a teppan-style dinner at hotspot ROKU (now with a kids menu!) alongside his mother and close friends, followed by a party at The h.wood Group’s Blind Dragon in West Hollywood. 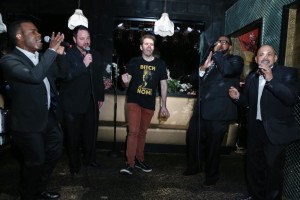 We had the pleasure of attending his 10 Year Anniversary party last year, so when the colorful invite featuring Perez in a psychedelic  pink graphic and titled”The Bitch Is Back” dropped into our inboxes, we knew we had to attend!

The event did not disappoint. Perez was all smiles as his closest friends joined him on the dance floor as the popular 90s group All 4 One made a ‘surprise’ appearance to sing their hit “I Swear” plus Perez’ favorite Earth Wind & Fire hits and of course a rendition of “Happy Birthday.”

The event was filled with Los Angeles’ top bloggers. Which makes sense right? The man who led the entertainment blogging revolution would have a few followers of his own! Some of the top editors and celebrity bloggers we spotted included outlets like Fashion Laine, Hollywood Life, Home Business Magazine, LA Weekly and more! 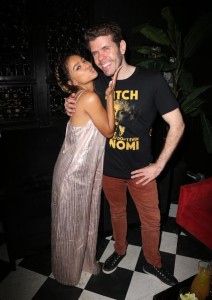 Perez became a household name dishing on celebrity news so naturally a few celebs showed up to support!  Karrueche Tran and Robin Antin were among those who came out to wish Perez well and even stopped by the club’s private high-tech karaoke rooms.

We might have sang a few songs or twenty ourselves!