PERKS OF BEING A WALLFLOWER 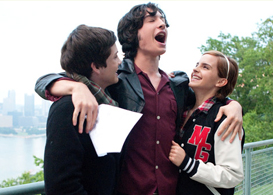 When you take a very well written book and transfer it to a screenplay for the big screen, sadly more often than not is lost. However, when you are able to get the author to directly partake in the writing process, then such a travesty is thankfully avoided. And in the case of the Perks of Being a Wallflower, the audience is treated to an amazing emotional rollercoaster ride that will leave the audience gasping as they are taken from one moment to the next.

The story is about young Charlie, played by Logan Lerman, who is starting school as a freshman in high school at some point during the 1980s. Before long, he is befriended by other similar outcasts who are seniors at the same school. Through a few parties and some painful confessions among the group, they become fast friends. And it is that friendship that carries throughout the movie. What sets this apart from most teen dramas – aside from the fact that this is all based on the man’s actual life – is that this isn’t a melodrama featuring budding teen starlets, disproportionately built, statuesque beautiful people with problems obviously contrived to make them suffer hardships. Everything about this movie feels very real; this could happen to anyone. The characters here are what really bring things together. There is the obviously but not flamboyantly homosexual Patrick, played by Ezra Miller who is the class clown who actually cares about others as much if not more than himself. And of course, there’s Emma Watson who plays Sam; the young woman who everyone seems to have a crush on despite the lack of being legitimately physically attractive. The three of them together have scenes that are equally touching and, at times, quite jarring.

The hardest part of the movie is the constant change in tone. For example, in one moment, Charlie is being the life of the party because he was given a marijuana brownie and he had never been high before. Sam, realizing that he isn’t in full control of his cognitive function, takes him to the kitchen to make him a milkshake, where Charlie casually mentions that his best friend shot himself the summer before the school year started. Just like that, we are taken from a light-hearted, humorous moment to a heart wrenching confession that illustrates the dark inner turmoil that each of the main characters is going through. Coincidentally, that is not even the heaviest scene or confession.

With the entire cast being artistic, music is naturally a major part of this movie. Every fifth scene or so someone is exchanging a mix tape with someone else, showing off the different kinds of music that each of them are into. The audience is treated to a wide range of alternative, rock, and pop music of the decade that, although featured in nearly every scene, is merely just a background visage to carry on the story of the film.

If this movie suffers from anything, it is from not knowing where to end itself. Much like other movies of its genre, with a story focused around characters and their development, there is no true ending. The story just has to stop, and it feels quite abrupt. However, if the only problem that your movie has is that it had to end too soon, then you’ve definitely done something right.

Stephen Chbosky, writer, director and novelist of the film, made a captivating expose into the lives of every day characters that will not only warm your heart, but will run your emotions to the extreme with little chance for catharsis. The film features a few twists in character development that, even when not very subtle, still leave an impact that will stay with you. The story is paced properly so that we are given enough time to get to know the characters so that when they reach a new plight, the audience is emotionally invested. You want to see them succeed out of a strong sense of empathy. And when the credits roll and the protagonist is finally truly redeemed, the following catharsis, while not a truly satisfying ending, will leave you feeling complete. It’s a well-told, original story that is powerful, intelligent, and relatable regardless of age. Three and a half stars out of four.