If you are a super fan of Portlandia, chances are this past month you have re-watched every episode on a binge-mission to prep yourself for the return of Carrie + Fred. Not part of this club? Let’s catch you up…

Portlandia is what I would describe as a series that contains several different mini-series within it. It’s a sketch show with characters that are consistent through each season, and those characters are played and written by Carrie Brownstein (where are my Sleater-Kinney lovers?) and Fred Armisen. 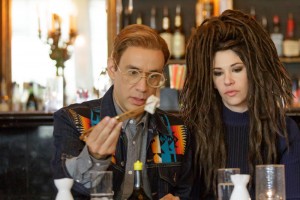 Moving into it’s sixth season, I feel like the hype around the show is at it’s highest thanks to it’s availability on streaming services like Netflix. Also, have you followed the monumental year Carrie has had with the reunion of Sleater-Kinney, a tour (music) a best-selling book, another tour (book), Transparent, Carol…I mean, this woman is a powerhouse. And Fred…if I started on him I would never be able to finish this article. Not to mention those Portlandia Old Navy ads that caught us all off guard.

To add to this excitement, IFC launched a teaser – episode 0 of season six – to calm all our binge withdrawals until Thursday’s premiere. We see Fred get gray hair and contemplate the passage of time, while Carrie has one of the most hilarious OBGYN visits I have ever seen. The mayor is back, Natasha Lyonne stops in and Carrie + Fred decide to have a baby.

One of the more interesting things to note is that this episode follows Carrie + Fred through the entire 20 minutes, which is something that began happening last season instead of jumping around different storylines. I’m excited to see more of this, and I’m sure for fans who have been watching since the beginning, it’s a sort of satisfying cure for the curiosity about these characters and their backstories.

If you also feel like a piece of you has been missing while waiting for the new season, comment below and let us know what you’re looking forward to seeing this year!