The lines, both general admission and VIP, weren’t relenting. The atmosphere brought with it, more than the usual air of excitement. Even a sense that something unexpected was waiting just around the clock. With fuchsia lights strobing along the black brick walls of the Hubble Studio, and the EF symbol, for Effin Vodka, the company backing this event, everyone felt like they were in their power before even being let in to the bar.

The event, was the EFFEN Vodka’s Recreation of the Nightclub “TRUTH” from the esteemed television show Power. It was a lustre stricken affair, taking place over the course of two nights, Wednesday, Aug. 22, and Thursday, Aug. 24 this week, respectively. Held at the aforementioned Hubble Studio in the Northern area of Boyle Heights. It was the perfect location for such an ordeal – it was very hidden away from public, in a somewhat desolate area that one would suspect such a soiree to be. Right in the middle of an industrial area. It would seem a lot of new spots are coming up around the block.

The event production team really hit the mark. The inside of the studio was completely decked out like the Nightclub in the series, complete with the logo in the entrance, a fog machine creating the total New York City nightclub atmosphere, and more. Finger foods were delectable and brought out on fancy trays, while Vodka shots of all types were passed around – most of them going down too smooth for the attendees own good! 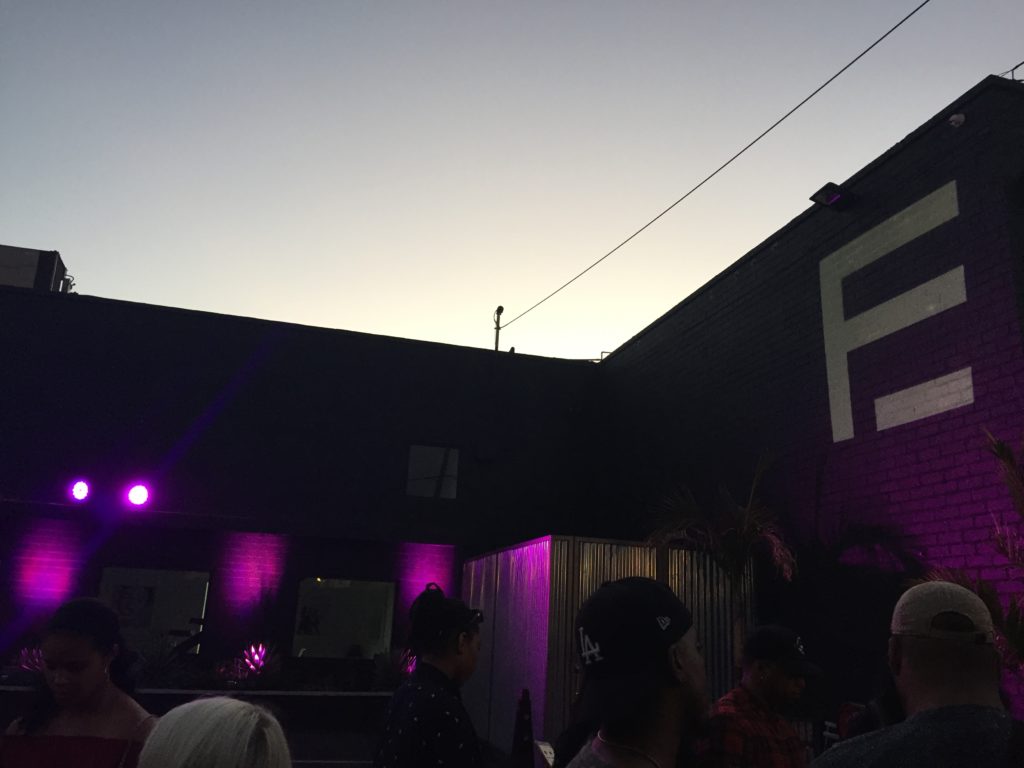 But the drinks weren’t the only smooth aspect to this gregarious occasion. The DJ was spinning tracks from artists associated with the famous television fodder. A BPM (Beat Per Minute) rampage encompassed the dance floor, bringing even the most self-conscious of the crowd to ebullient life. Strobe lights accented the evening’s more exquisite moments.

Effin Vodka performed what could have been an easily unceremonious event, like someone singing in their car on the 405 freeway. It was totally unaware, free flowing, with the whole event seeming to wink at its attendees as if they were in on the joke. This created not only a fun atmosphere, but that one devoid of judgements, harshness or complexes.

It was a reminder, during the mass hysteria of what’s in the news today, that it’s okay to have an adult night of fun, frolicking fancy freeness. The location was the wisest choice in all of it, too. It proves that there needn’t be a hot spot in the middle of town for just anyone to go and enjoy the evening. It could very well be that the Hubble Studio would have been, architecturally, the best choice to house the event, but more night life seen in the Northern Boyle Heights area like this, and we’d see more of a thriving community through it, and a reason Los Angeles is known for such festivities.

Effin Vodka deserve mention again too, for their valiant efforts to create an event that both acts as PR for a hit television series, but that could bring the nightlife back to the East DTLA scene and bring people from different areas together. And to do so in such a manner that was guised as nothing more than a two-day stint, that unfortunately most people would probably label as just another night on the town.

There was a very real vibe to attending this event that bubbled and glistened like the alcohol being poured. It was a night to be savored. The Power Event held in Hubble Studio is the kind of continuous event we need in Los Angeles, for all reasons stated above and more! With any luck, Effin Vodka will helm many more, bringing class back to the nightlife scene. Powerful.