Just because a few films left a bad taste in our mouths doesn’t mean that we had to stay away from the movies altogether. There were a multitude of very enjoyable films released this year; making it the first year in a few where making the best of list was actually more difficult than the worst of this year. Below are my choices for the films that gave me the most entertainment; and as always, I highly welcome any input or opinions that differ from my own.

10.) Trainwreck :Another R-rated comedy that leaves the audience rolling in the aisles, and solidified Amy Schumer as the comedy “IT” girl in Hollywood for years to come.

9.) Project Alamanac: Not only showing that found footage movies can be done right and still be entertaining, these teenagers were actually enjoyable and easy to relate to. A few potential plot and continuity issues keep it from being truly great, but it is still one of the more enjoyable films this year. 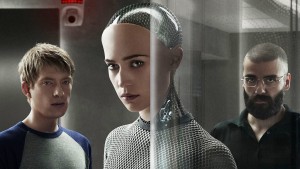 Ex Machina proved to be one of the best science fiction films of the year.

8.) Ex Machina: Bringing minimalism to the forefront, this movie had little more than 4 characters with a speaking part and perhaps three different sets throughout, but had the audience at the edge of its seat and had them both liking and not trusting any of the main characters.

7.) Straight Outta Compton: Despite the frustration of being yet another biopic about people or events within the last 25 years, this film pulls few punches in its intensely human and personal characterization of one of the biggest hip-hop acts of all time.

6.) Black Mass: Professional humanoid chameleon Johnny Depp does it again; this time as a mentally unstable yet still charismatic mobster. The film is a little on the long side and a little on the dark and gritty side, yet neither are especially detrimental to the film.

5.) Inside Out: It just goes to show that a movie without a completely original idea can still tell it in an original, interesting, and outright hilarious way.

4.) Jurassic World: This film definitely had its share of problems (such as a woman outrunning a T-Rex while wearing high heels) , but with very charismatic characters and a story that is a clear send up to the original, this was the highest grossing film of the year with good reason. 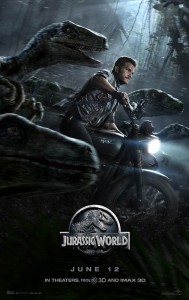 Jurassic World rocked the box office in 2015 and managed to be one of the best films of the year.

3.) It Follows:  Not only one of the best movies of the year, arguably this is one of the most original, atmospheric and haunting film of recent years.

2.) Avengers: Age of Ultron: Wonderfully, continuously entertaining characters, beautiful visuals, virtually seamless CGI, and a tight plot that makes for a greatly entertaining movie, and leaves a lot of room for a continuation of the Marvel cinematic universe

1.) Mad Max: Fury Road: This film has the plot complexity of your average Road Runner cartoon and the depth of your average middle school short story. And neither of those factors were enough to detract from downright awesome this movie was, offering something for everyone.

The Loft: Despite this European remake being entertaining and provocative its total lack of likeable characters, as intentional as that might be, leaves it off the list.