The casts and producers of “Pretty Little Liars” and “Dead of Summer” gathered at the Hollywood Forever Cemetery on Wednesday, June 15th for a special preview of Freeform’s Tuesday night line-up!

The evening kicked off with a “Pretty Little Liars” Q & A session about the upcoming seventh season, followed by a screening of the “Dead of Summer” series premiere.

So what do we have to look forward to this summer (and winter as Part 1 will start in June but Part 2 will return this winter).

“There will be a proposal in the summer and a wedding when we come back in the winter,” said King. But it won’t be all love this season…she continued, “It will also be the biggest body count we’ve ever had on a season.”

The only question left unanswered? Will this season be the Liars last? Rumors have been swirling but Freeform did not confirm.  For now, we’ll just have to enjoy another season of guilty pleasure! 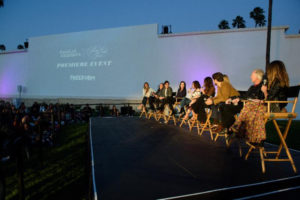