DreamWorks Pictures’ “The Light Between Oceans” is  a heart-breaking drama about fate, love, moral dilemmas and the lengths to which one couple will go to see their dreams realized.

The film, which is based on the best-selling novel by M.L. Stedman, stars Michael Fassbender, Alicia Vikander, Rachel Weisz, Bryan Brown and Jack Thompson and is written and directed by Derek Cianfrance.  The film is produced by David Heyman and Jeffrey Clifford with Tom Karnowski, Rosie Alison, Jeff Skoll and Jonathan King executive producing.  It opens worldwide September 2nd. 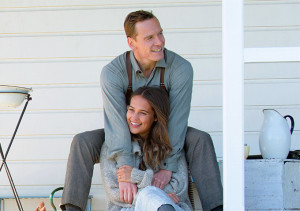 About the Film
On a remote Australian island in the years following World War I, a madly-in-love lighthouse keeper and his wife (Michael Fassbender and Alicia Vikander) lose their child. Fate intervenes when a small boat washes ashore with a dead man and an infant. It’s a dilemma. “Can’t be just a coincidence that she shows up,” Isabel Sherbourne tells her husband. He replies, “She’s a lovely baby, but you can’t keep her.” Nevertheless they decide to raise the child as their own. Then they meet a woman whose sister (Rachel Weisz) endured a terrible tragedy: Her husband and baby daughter were lost at sea.