Pride and Prejudice and Zombies won’t win any awards but it is tailor made to become a midnight movie cult classic. The film, based on a book by the same name, takes the classic Jane Austen tale and flips it on its head. The result is a fascinating take on the era that manages to both keep the wit and message that runs through Austen’s original novel.

In this alternate timeline, zombies are a plague that was spread through England by trade ships. After nearly 100 years of strife and turmoil fighting the zombie hordes the English have not only learned how to fight but make an art of it. The upper class study in Japan while the lower class study in China. It is not like they would let something as small as the apocalypse get in the way of aristocracy. Make no mistake, while the Bennett sisters in this universe are mighty warrior women, they still have the main goal of getting married and settling down. 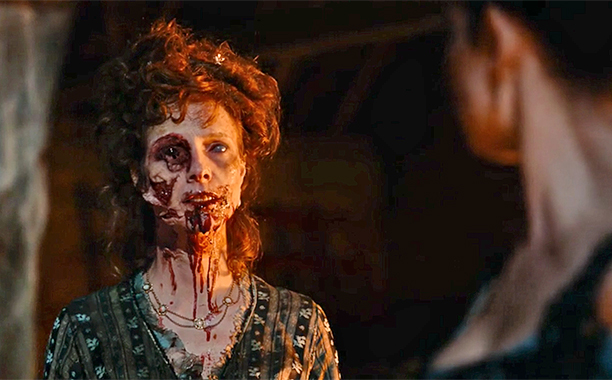 Pride and Prejudice and Zombies is most at home when it embraces the campier side of the genre.

Everyone, of course, except Elizabeth Bennett (Lily James) who is unrefined and wants only to protect her family at all costs. Everything changes once Mr. Darcy (Sam Riley) enters the picture. His companion Mr. Bingley (Douglas Booth) yearns for Jane Bennett (Bella Heathcote) but their fortunes divide them. Despite the world being totally changed by zombie outbreaks and right on the verge of the collapse quite a lot of Austen’s novel remains intact. The context may be different but much of it remains the same. That being said if you ever found Jane Austen’s work boring this version is considerably better than the original text. Nothing spices up classical literature like sword fights, zombies and the hint of nudity.

It is hard not to be reminded of the golden age of campy horror while watching this film. While this film has far more of a budget than anything produced in the 70s that same level of campy joy runs rampant throughout the movie. The zombies, while scary at times, are never scary enough to really frighten. They somehow talk and move and act just enough like humans to not get immersed in that world. Yet the deep mythology, fantastic acting and amazing fight scenes are more than enough to let it transcend the average movie.

Yet one gets the feeling that the film is holding back. While zombies may be the main villains in the story things never manage to get too gory. The fight scenes, while fantastic, never seem to unleash their full power. One can only imagine how mind blowing the film could have been with an R-rating.

The real test will come at the box office this weekend. Hardcore Jane Austen fans will probably abhor what is being done to the author’s novel while horror fanatics will walk away disappointed by the lack violence. This is a movie caught between two worlds that probably won’t satisfy either.