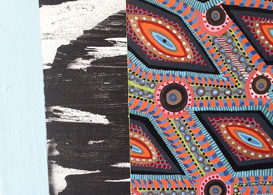 I was recently able to attend the grand opening of “Lost Illusions” at Project Gallery in Hollywood. The amazing muralist and painter Zio Ziegler showcased his work and it was by far one of the most fun nights I’ve had exploring the L.A. art scene.

Ziegler is an established San Francisco based painter and “Lost Illusions” was a night of great conversation and genuine discussion. I was able to speak briefly with the artist about what influences him to paint. Ziegler told Press Pass LA that painting,”has a balance for him”. “I’ve painted at  all sorts of times in my life. Within the balance of life, there is consciousness, instinct, and distraction. My work is a constant fusion of all three.”

I noticed that most of the work in the gallery had both a classical and contemporary feel to it, torn between the two.  There was a nod to both the digital world and to that of a voyeur of the world and of one’s imagination. There was organic growth and popping color in each piece. I admired Ziegler’s use of shapes and abstract illusions. His work reflects a symbiotic relationship between classical and contemporary, urban and natural, and the indigenous and foreign. The tribal elements are conducive to the environment in which they are created.

Ziegler told Press Pass LA that he has been inspired by classical philosophy, literature, and art and that he aims to offer a unique perspective on nature and the human experience in his work.

Zio’s murals can be seen in the Mission District of San Francisco and the Facebook Headquarters in Menlo Park. His canvasses were recently viewed at the Carmichael Gallery in Culver City and can currently be seen at  Project Gallery. For more information visit Zio Ziegler.