Q & A WITH ARTHUR LUHN, DIRECTOR: THE HOUSE ACROSS THE STREET

There are so many extraordinary people who make Hollywood and our filmmaking community a better, more cool place. However, there are some people that just take it to a whole other level. Arthur Luhn, award-winning director of the pscychological thriller, The House Across the Street, is more than just a great director.

He’s a great human and has an amazing success story. Born completely deaf, Arthur has directed multiple award-winning films including The Golden Legacy and Conned. This Saturday, The House Across the Street makes its L.A. debut at the famed Montalban Theater where hearing and deaf spectators will enjoy his newest masterpiece.

Eric Roberts (The Dark Knight, The Expendables), Ethan Embry (Vacancy, Harold & Kumar), Jessica Sonneborn (Alice D, Money Shot), Alex Rocco (The Godfather II, Smokin’ Aces) and Courtney Gains (Children of the Corn, Back to the Future) all have roles in this film and had the honor of working with Arthur.

We’re equally honored that he took time out of his schedule to meet with us! Learn more about Arthur and The House Across the Street, below. And, if you haven’t already, grab your tickets to watch the film on Saturday, April 18th before they sell out.

PPLA: We’re excited to see The House Across the Street, what was your inspiration behind the film?

AL: It came about because of a variety of influences, and inspirations. I take my inspiration from life, from observing everything around me. With this particular film, I was inspired by observing the choices that people make in their life that directly impact them, and observing that life isn’t about what happens to you but how you react to what happens to you. It’s a matter of choice, a matter of attitude. Growing up, I was taught that attitude is 99% of everything. I now believe that attitude is 99.9% of everything. It’s not everyday we meet successful directors, especially directors who are deaf.

PPLA: How do you create award-winning films without being able hear?

AL: A successful production has nothing to do with the ability to hear, and everything to do with your preparation, especially in pre-production. I believe in being completely prepared so that by the time shooting rolls around it’s a matter of function, and you’re ready for anything that pops up.

PPLA: How did you get into directing? My dad had a 8mm film camera that he shot family outings with, every now and then, when I was very young, and when he set up the projector and film screen, it was love at first sight with me.

PPLA: Would you say that horror/suspense is your niche or do you plan to branch out and attempt to direct other types of films?

AL: We’ve done other genres- an adventure, a comedy-action, and our next one is a serious drama.

PPLA: You have a great cast lined up for The House Across the Street. What was it like working with Eric Roberts and Ethan Embry?

AL: I had a great time with both of them. They showed up ready to work and like the seasoned veterans they are, gave me exactly what I asked for. They were very easygoing, no diva attitude, no ego and had the ability to just dial in, just like that. I wish actors like that were easy to find, especially locally.

PPLA: Tell us a little bit about your leading lady, Jessica Sonneborn. What was it about her that made her a perfect lead? 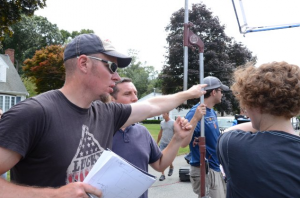 AL: First off was Jessica’s ability and willingness to sit down with me and go through everything about the character that she was to bring to life, and Jessica’s willingness to be open about herself as far as her strengths and weakness. That is not something that most actors can or are willing to give, and I am indebted to Jessica for giving me that. She put in a lot of hard work, and was very patient with me, and with my demands. Needless to say, I was very happy with the performance she gave and it captures exactly what I was envisioning as far as bringing Amy to life. If you watch her in the film, there’s just something oddly mechanical about Amy, her delivery is a little flat- much like someone going through the motions after experiencing a major trauma. She is otherwise normal and functional, and Jessica doesn’t overdo this aspect and that was important to me, and to the theme of the film as I wanted everything just slightly off, but not so apparent. I wanted a sense of unease, of something that’s just not right about this otherwise ordinary American suburb. And as the movie unfolds, you see the layers start coming off, of her, and you see the raw emotions, the distrust, the cold wrath starting to surface.

PPLA: What can people expect from The House Across the Street?

PPLA: Are there any other films you’re working on that we can look forward to in the future?

AL: Yes, we’re going to finish off Five O’Clock Comes Early, a drama, and then there’s The Cursed Town of Kill Hill a comedy-horror that mocks the campy horror genre that was so popular in the 80’s.