Q & A WITH LEGENDARY ANIMATOR BILL PLYMPTON AT COMIC CON

Press Pass LA recently had the honor of meeting animation legend Bill Plympton at Comic Con. In fact, we caught him mid-conversation with Simpsons creator Matt Groenig, just a perk of the fest! Luckily, we were able to steal Bill away for this exclusive look at his current projects.

Bill Plympton is not only a terrific animator and cartoonist, he is also a director, screenwriter and producer best known for his 1987 Academy Award-nominated animated short Your Face and his series of shorts Guard Dog, Guide Dog, Hot Dog and Horn Dog.  His work has been published in The New York Times, as well as magazines like Vogue, Rolling Stone, Vanity Fair, Penthouse, and more! With more than 40 animated shorts and 6 animated features under his belt, we knew this was one interview we could not miss while in San Diego.

BP: Yes, thank you! Stoplight was an idea that came to me pretty naturally. I’m from Oregon originally and I was driving through the back roads there and I saw this stoplight that was basically abandoned and nobody really used or cared about. I just felt sad for this stoplight. So I tho 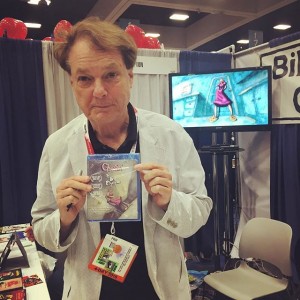 ught it’d be interesting to make a film about a lonely stoplight who has no friends and nothing to do in life. It’s very metaphorical obviously. There are a lot of people like that in the world who feel that their lives are being wasted and they’re not loved. And so I thought this stoplight needed some love! The film is very minimalistic. There’s not a lot of action or anything in it, and so I knew the voiceover needed to be someone special. We really needed that voice to be not only someone well known but someone who can really carry the character and tell the story.

PPLA: Well Patton is perfect, such a witty guy! Even his twitter is hilarious.

BP: Yes,  he’s very witty! So I think about two years ago, he came to my booth at Comic Con and he said he was a big fan of my stuff. I said “well, I’m a big fan of yours too… would you like to work on any of my projects?” He said he would love to do voice work for one of my films and so I contacted him about three months ago and arranged a meeting in L.A.  I was flying out to L.A. for something so I figured it was a good time to do it. And so he came by for about 20 minutes only and he nailed it.  He really just nailed it!  I mean he knew his lines, of course; he knew all the lines and he did three takes of each line and each one was as good as the other. He’s really a consummate professional and that made it very easy to do. The film was just finished about a week ago.

PPLA: So is this the first place you’ve showed it?

BP: It world premiered yesterday and then we played it yesterday afternoon at my panel where we showed the Hitler film Hitler’s Folly and then Revengeance which is the new film I’m working on. 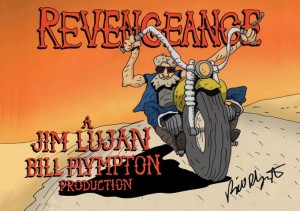 BP: Yes, it’s my first time collaborated on a film, and he (Jim Lujan, his collaborator) was just here. (Looking around the Comic Con floor)  I don’t know where Jim went to but he’s a wonderful writer and a character designer. The film is a feature; it’s going to be 80 minutes maybe 85 minutes. He does great voices and music so pretty much all I’m doing is directing it and doing the animation and producing.

PPLA: All you are doing! That sounds like quite a lot…

BP: Yes, but he wrote it and he did the character design and now he’s doing the voices and the music which is  really an important part of the process.

PPLA: Well, I think you are being modest but it sounds like a great partnership!  Your other film Cheatin’ is out now and that’s also a feature.

BP: Yes, that’s a feature and it’s a out on Vimeo. It came out on Vimeo about 2 months ago and we’re negotiating a deal for iTunes right now and Netflix as well.

PPLA: It’s interesting how things come out differently now then even 5 or 10 years ago. There is so much opportunity with alternative platforms.

BP: Yes there is. This film did come out theatrically first though. It was opened in NY and LA and then about 30 or 40 cinemas across the country. So we had a fairly good theatrical run and the reviews were phenomenal so we were happy about that. Unfortunately we don’t have the kind of budget that Pixar and Dreamworks has to promote the film. We can’t buy adds on buses and balloons and skywriting and things like that.

BP: Eventually it will become respected and noticed by people telling their friends about it and seeing it on the Internet.

PPLA: So you’ve been a long time animator, you’ve worked with MTV, music stars like Kanye West , you work on feature films… what first attracted you to animation? Were you a young boy or older in life?

BP: I was only like 3 or 4 and I saw Walt Disney on TV and I said, “Wow, that is so entertaining! I wish I could do that.” As I kept watching the show, I realized there are people called animators who actually make the cartoons move.  Then I started watching Tex Real a Warner Brother’s cartoon and began to get  really excited about animation. As I got older I discovered independent animation and I had no idea that there was such a thing. I thought you had to work for the big Hollywood Studio and that was it. But a lot of people, especially in Europe, were doing independent films and they were really so much more creative. They were so much more of an outlet of your own personal experience and personal ideas. You don’t have to worry as much about bureaucracy or budgets as with the studios.

PPLA: I think you have to work on what inspires you. Like Stoplight inspired you.  Do you find that most of your film ideas just come to you in your daily life like that?

BP: Yes, I have a book here of ideas that I keep.  So if I’m in a subway or in an airplane or something you know I’ll write down some ideas and I’ll just write them down here (takes out his notepad) and that’s it. Then when I get home, I write them down on a big book. So I have a file cabinets of big books in my home just full of ideas that I’ll never in my lifetime finish making all into films. Out of all the ideas I want to do, there are just too many!

PPLA: Do you have any favorites of the big studio movies that have come out in recent years that you think are just really great?

BP: Yes, a lot of them were great!  I love the How to Train Your Dragon series. I love Tangled, Pixar makes great films. I love Inside Out and just think that’s a really great, original film.

PPLA: I liked it too, it was a very different concept.

BP: Very witty concept!  I also love Chris Miller who just stopped by our booth here and he directed Shrek the Third and Puss in Boots  and voiced  Kowalski in Madagascar. He also did Cloudy with a Chance of Meatballs and Lego Movie,  he’s really funny and I just love his films.

PPLA: Sometimes you notice that the animated characters look a little bit like the real actors? Do you draw the characters in advance and then just tweak them once the voices are cast or do you ever draw the character for a specific actor or with them in mind before casting?

BP: Generally, I have a mirror in front of my drawing board and to get the expression right I’ll make a face in the mirror  or mimic an expre 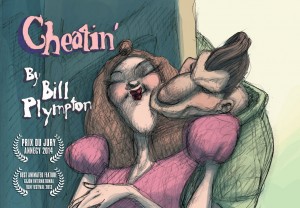 ssion. So maybe, accidentally my characteristics and personal traits get in the character. But I try to keep the characters as weird as possible and not specific to one person. In the new film I’m working on Revengeance, the characters are designed by Jim Lujan and he does wonderful characters, so it’s a pleasure to work with someone like that because then I don’t have to deal with my own designs.  The character designs are one of the most important parts of making a film. It’s like hiring a good actor like George Clooney or Jennifer Aniston. If you’ve got a good character then the film is really easy to set up.

PPLA: I was going to ask that, when you cast your films do you do a standard audition or do you only look for people that have done voiceover work before?

BP: I try to stay away from SAG people because it’s just such a nightmare trying to deal with the guild generally. I try to get friends of mine who I think are really good voice artists who can do really good voices. On my film Cheatin’ there is no dialogue at all. So it’s all dialogue free; it’s not silent, it’s music and sound effects and things like that. But with Revengeance Jim Lujan is a great voice artist so he’s doing 80% of the voices and that makes it so much easier so I don’t have to get involved really with casting.  With Patton Oswalt…well I would do anything to get him on any one of my films, so I don’t mind working with SAG for him!

PPLA: Any advice to future animators, anyone that’s watching your films or out there thinking I want to do this?

BP: Yes, a couple things. One is I have three rules for being a successful animation director and producer. Make your films short- like 5 minutes or less, cheap- under 5,000 dollars and  funny! And if you can meet all three of those requirements then I think you have a really good chance of making a profit on the film. It really upsets me that people feel there’s no money in shorts animation.  I think there is. I think one can make money on shorts; I do it.  I have made it my career and make a profit on my films. I’ve gotten very successful at making short films, so if you can follow those three rules you can be a success too.

Great words of advice!  And just to bring things full circle for our Comic Con interview,  here’s a fun trivia fact about Bill Plympton and Matt Groenig. Bill actually worked with his good friend Matt on The Simpsons,  animating the opening couch gag for the episodes “Beware My Cheating Bart” in 2012, “Black Eyed, Please” in 2013 and “Married to the Blob” in 2014.