Legendary Saxon’s front man Peter “Biff” Byfford is one pretty easy going guy who enjoys writing music and touring with bands like Motorhead and Crobot. We had the chance to sit down and interview this legend before his recent Las Vegas show! 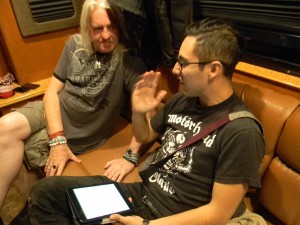 Walking to The House of Blues at the Mandalay Bay in Las Vegas in 107 degree weather is worth the sweat and adrenaline rush one gets. As we approach the gates to the Chateau, where Biff prepares to rock the stage, I get my camera ready as well as my mind set on the questions I have for this rock star. I enter the bus with my brother (cameraman) by my side to be welcomed by his grace. Wearing some basketball shorts and a shirt Biff greets us as we sit down and let the questions commence.

PPLA: It appears to me that the legendary bands like Motorhead, which you happen to be touring with, as well as Slayer, and Exodus have been dishing out new music lately. Would you say your new album will help put Heavy Metal on the radar of younger fans?

PB:  Well, its’ all due to great vibes with the band and this album is just such a good project. It gives me good vibes to be releasing it. It can mean a lot to younger fans, but we also have our old fan base and we write for the love of music.

PPLA: It seems to me that since your debut in 1976 going from Son of A Bitch to Saxon, the band has stayed together. What drives you to keep going?

PB: Love for music. The irony of why things happen can’t be explained. All we have is the love for music and fans; that is what keeps us going.

PPLA: You are touring with legends like Motorhead, Ozzy and Anthrax. Could we  be seeing a tour with Saxon, Iron Maiden and Motorhead the three British Heavy Metal powers in the future? What are the odds of that?

PB: Well, we helped each other for the tour and we would never oppose for a British heavy metal show! We started playing around the same time and would always support each other. Iron Maiden is great and we are all friends.

PPLA: Touring with Motorhead in the past and present must have its crazy stories, do you have any stories that you would like to share about your tour so far?

PB: (laughs) …It’s something that I don’t talk much about. It’s too wild, the media would not take it well!

PPLA: What do you think of the new wave of Metal, bands like Arch Enemy, Killswitch Engage etc. Can they be considered heavy metal? I personally don’t think so.

PB: Bands like Killswitch Engage, they have an over-tone, something you can’t compare to heavy metal.

PPLA: Right, there is more melody and cleanliness to heavy metal. Tell me about your new album Battering Ram.

PB: Have you heard it?

PPLA: Yes I have.

I thought he was testing me to see if I knew his music, as many reporters would just agree or watch a brief clip of a song so I talked about my thoughts on tracks “Altar of Gods” and “Princes of the Night.”

PB: Well you have done your homework! This album is great and it has good vibes. We got together and had fun recording it.

PPLA: Lets throw it back here for a moment. What was it like to have Ozzy Osbourne open for you guys back in 1981?

PB: It was an amazing experience and one that will always remain in my mind.

Time was running short as Biff had to prepare for his show. I gratefully thanked him for his time and proceeded to ask my final question…

PPLA: What is it like to wake up as Mr. Peter “Biff” Byford every morning? 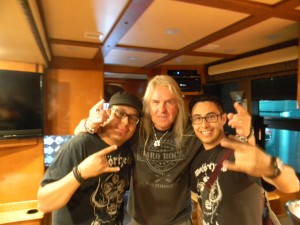 PB: It’s great! I just keep waking up. What’s not to like. (laughs)

I shook his hand and we proceeded to our exit. I have to admit that I was feeling a bit overwhelmed with his presence as he is nothing less than a heavy metal God. I walked out looking forward to the show that night and the band could not have been better. With his iconic, powerful voice Biff took the stage and chanted those melodic metal words that fans longed to hear. The rest of the band played in unison and tore the House of Blues down with tracks from Battering Ram and other classics.

Now don’t let the interview fool you,  we had some off the record laughs and stories from this legend as well!

It was great to meet such a down to earth guy who knows that he is playing for the love of music and is grateful to have such a great fan base.