The up-and-coming standup comedian and actress—Nina Daniels—is making her mark on the world. As of late, the New York-raised comedian has become known for a role she held on IFC’s “Maron”, as well incorporating her cello into her standup acts.

Press Pass LA had the opportunity to speak with Daniels about her rise within the acting world and her early beginnings as one of the few African American females within the standup business. Without delay, check out the intriguing discussion we had with Nina Daniels!

PPLA: To start, you had recently made a guest appearance on IFC’s Maron. Can you give us a little insight as to your role within the show?

PPLA: One of the biggest issues your character raises on the show is the issue of diversity and race. How has this impacted you in your career?

ND: It’s really interesting because when I’d originally auditioned for “Maron”, I had originally auditioned for a character. It was really funny because the comedy I do is very different from what they’re talking about on “Maron”. On “Maron,” I’m sort of about going to predominantly African American comedy clubs—which is actually the opposite from me. I’m normally one of the only African Americans on a lineup most nights or in the shows that I do because of the type of comedy I do.

PPLA: So, how would you describe your style of comedy?

ND: Well, I would say it’s a mixture of standup storytelling because I do a lot of autobiographical stuff, mixed in with musical comedy because I also use my cello in my act—Gerry, my cello’s name is Gerry. So, I do a combination of both. I go from doing traditional standup and [then] I’ll do some stuff on the cello—I’ll jump back and forth from the mic to the cello. I kind of had to invent my style because there is no one really doing my style.

PPLA: It’s okay because you can be an innovator in that! So getting back to your work on “Maron”, how has your experience been with filming the show?

You think it would’ve stuck out more prior to shooting, but for whatever reason that day, it really stuck out. I was actually really surprised how cool Marc was because a lot of people said he was going to be crazy and awful. And, I’m kind of bummed that he wasn’t because I was looking forward to crazy theatrics! It was really cool and I got to have my own voice and input on the character. They just wanted you to be yourself.

PPLA: Nice! It’s really rare when you have that kind of freedom to do what you want or say what you want in that situation. Do you have any favorite moments that stuck out from that experience?

ND: I would say my favorite moment was when well; I’m a huge Bobcat Goldthwait fan. So, when the director comes over to me and asks me “what do you think about this line?” I’m sitting here thinking to myself, I’ve seen this guy on TV [and] I love his work. I can’t believe he’s talking to me right now; he’s actually speaking to me! It’s crazy.

PPLA: So, you began your career as a stand-up comedian. How did you get involved in that field? What motivated you to be a comedian?

ND: I had gone to Sundance as a part of small role in a movie called “Pariah” that had won an award and did very well at Sundance. I went to Sundance mainly because I was curious—I only had one scene! I just remember that right about that time, I was thinking to myself that I wanted to do more writing and I want to do more independent stuff. I remember going to Sundance and seeing some comedies and really liking the dynamics and the levels of what the comedic actors could do—it felt really amazing. A lot of actors I know started as stand-ups. It’s really interesting to see how talented a lot of stand up’s are. I knew I liked comedy and I knew [that] I wanted to have my own voice. So, I came back from Sundance feeling really inspired. I don’t think [that] I knew I wanted to be a standup comedian necessarily, but I think I wanted to go into it because you had to write and find your own voice. Once I started doing it, I never ever looked back!

PPLA: That’s great! Do you have any influences within the field? If yes, who?

ND: Absolutely! It’s kind of hard to find influences because of as of more recent, there are more people to pull from now then there were—even when I first started. Key & Peele were just popping off when I started doing standup. Tina Fey is a huge influence, I love Tina Fey and I think she’s really amazing. I’m a huge fan of Whoopi Goldberg’s one-woman show; I’ve seen it on tape a couple of times. I’m a huge fan of Zach Galifianakis, huge! I would say he’s a very big influence. Also, I would say Jamie Foxx is a huge influence because he’s definitely a strong standup [comedian] and also his musical talent—[just] watching him blend the two. If you think about it, there is not a lot of African American’s doing musical comedy. Jamie Foxx is a classically trained pianist and since I am classically trained as a cellist, I find Jamie Foxx’s talent to have a strong influence.

PPLA: Speaking of musical talent, one of your most-talked about acts is your “Is My Cello a Boy or a Girl?” What exactly inspired this?

ND: Well, that’s a really good question! I think because of like the way Gerry’s shaped—people come up to me and they would ask me “is your cello a male or a female?” It’s a question that I get all the time and I never thought about it until people started asking me!

PPLA: I think it’s really interesting that people have asked you that!

ND: Oh, absolutely! Some shows I’ll go and I won’t bring my cello. Then, people will come up to me like, “hey, where is Gerry?” and I’ll say, “oh, Gerry’s home.” I think that when people ask me that, it’s really a huge influence. And, you know… I love men and it just made me think of the cello between my legs—it made me think of man. One little thing sparks it and all of a sudden, your imagination takes over.

PPLA: As of late, you’ve had the opportunity to work on some great projects, including Showtime’s “Masters of Sex”. What has your experience been like with tackling more dramatic roles?

ND: Because of my theater background, I actually started working in more dramatic roles. I think I am a better dramatic actor than a comedic actor. I feel like almost everything I’ve done has been dramatic, up until “Maron”. I don’t know if I feel that you have to be either one. I feel like if you are lucky, your role will bring both elements. 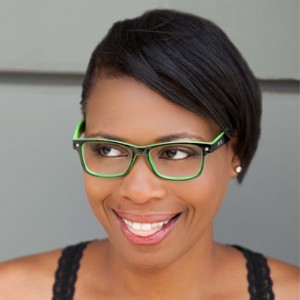 PPLA: Lastly, do you have any upcoming projects that we can look forward to seeing you in?

ND: Yea, I have a couple! I have standup [shows] and I am working on my pilot. We will start pitching that project in August. Gerry’s in it! It’s about a person who is very lonely and her only companion is her cello. We actually just shot two episodes and I am really excited about what I saw.

Make sure to catch Nina Daniels at one of her upcoming standup performances and if you’re lucky, Gerry might make an appearance! Keep your eye out for Nina in the near future with her forthcoming ventures. Visit NinaDaniels.com