Just before the new year, we had the pleasure of seeing the talented Broadway star and film actress Renée Marino (Jersey Boys) in her one-woman, one night only show “I Am Me, Because of Three” at Rockwell Table & Stage.  We recently caught up with her about her plans for the show in 2016 and what’s next for her career. 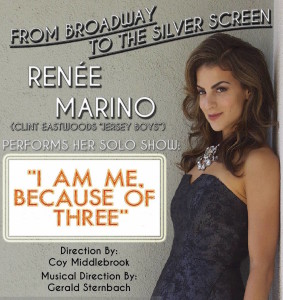 “I Am Me, Because of Three” took the audience through a comedic and musical  journey of Renée’s three inspirations in life- her Dad “Big Shit,” her Mom “Ona-Baby,” and her Grandma “Franny-Panties,” and yes, you read those nicknames right!

“Tonight I’d like you all to let yourselves go with me on this journey, as I tell you about the three people who I call my power trio, as a girl growing up, what else could I ask for? I had not only my Mom and Dad, but my Grandmother too, who lived with me from the day I was born, the love we had was beyond what any can imagine!” said Renée to kick off the evening that night at Rockwell. And what a journey it was!

The show included lessons she learned at major turning points in both her life and career including her time in a girl band, touring for Broadway productions, (Bad) blind dates, and being cast for her breakthrough film by Clint Eastwood!  All the stories were filled with humor, love, and family and accompanied by an unbeatable soundtrack that included a range of hits from different decades such as: “Fantasy” by Mariah Carey, “Girl on Fire” by Alicia Keys, “Brave” by Sara Bareilles, “I Hope You Dance” by Lee Ann Womack, “Orange Colored Sky” by Nat King Cole, “Smile” by Charlie Chaplin, “My Boyfriend’s Back” by The Angels, “Get On Your Feet” by Glora Estefan and more.

Renée showed off both her vocal range and dance skills owning the stage. She was accompanied  by Musical Director Gerald Sternbach on piano, along with Steven Hernandez on drums, Tony Pulizzi on guitar and Carlos Rivera Jr. on bass. The show was written by Marino herself along with Dante Russo and directed by  Coy Middlebrook.

Throughout the entire show I couldn’t get over how seamlessly the wide variety of music was woven through Renée’s personal stories and how universal her stories were for everyone in attendance. I felt as if she could be talking about my own Italian family and clearly so did everyone else as the crowd was completely enthralled with her performance from start to finish. There was literally not a full seat in the sold out house, because the audience was on their feet dancing and singing along all night!  Renee clearly ended the year on top and I couldn’t wait to find out what was next for her in 2016…

PPLA: What inspired you to create your one-woman show “I Am Me Because of Three” at Rockwell? And let me just say, I do hope you plan to extend it’s run so others can enjoy it!

RM: I decided to create my solo show because it has been something I’ve always wanted to do, but other projects took forefront in the past.  Now, being fairly new in LA, and pursuing tv/film, I thought this was the best time to put action behind my dream of writing my own show and create something where people in/out of the business could get a true feel for who Renée Marino is.  I decided to write about the three people who made me who I am, because that is where my heart is, and they are the ones who I love sharing stories about.

PPLA: Do you have plans to bring this show to other venues in LA or tour with it?

RM: I absolutely would like to do the show in more venues around LA, as well as NYC! I am confirming dates and locations now so stay tuned.

PPLA: What projects do you have coming up next- stage or film?

RM: As far as projects coming up soon, that is yet to be known! What I do know, is that I am really looking forward to this new year where I am excited for whats to come. I would love to do another film, as well as a fantastic sitcom where I can hone in on my comedy-chops!

PPLA: What was your proudest moment so far in your career & why?

RM: My proudest moment so far in my career was playing the role of Mary Delgado in the “Jersey Boys” film, because it was such a beautiful, unexpected happening. I had never performed in a film or television show before, and I just had to really trust myself, trust my talents, let the rest go and just do it! I had the absolute best experience filming that movie with such a powerful role, and with the most wonderful people, like Clint Eastwood and his entire team that made it all the more incredible.

PPLA: What was the moment where you almost gave up and why didn’t you?

RM: I have to say that there were times in my career, where frustration set in, and I had the thought of “oh is this truly what I’m meant for?” but as soon as I stated the question, something deep inside me said “yes it is, otherwise why would have been given these talents?”. Frustration, and the low times are part of this ride, and what makes us able to be completely creative beings.

PPLA: Advice to others starting out as an actor or pursuing a dream career?

RM: My best advice to those starting out is to remember, training never stops as an artist because your entire being IS your instrument, therefore you must keep your body, mind and emotions in tune. These are the tools that help you to create and perform, so you have to take good care of those tools. Also, be comfortable with who you are, and when you walk into any room to audition, always be YOURSELF, because the people behind that table want to know who YOU are, not the YOU who is TRYING to be someone that YOU THINK THEY WANT. That is a good lesson to remember not just in auditions but in everyday life!

PPLA: Any type of roles or dream collaborations (actors/directors etc) that you are hoping to have next? 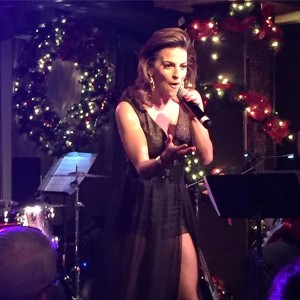 RM: One of my dreams is to film a movie about the life of a hollywood starlet like Debbie Reynolds who was a true triple threat. Having the opportunity to live the life on screen of such a talented woman while getting to utilize my other two loves of singing and dancing would be a true gift. I would love to work with Clint Eastwood again, because he was an actor’s dream, giving us so much freedom, where it felt more like a collaboration than anything else. He taught me a great deal as an artist, and simply as a person. I would also love to work with Mr. Martin Scorsese whose work I really admire.

PPLA: Any fun/weird rituals before you step out on stage or film?

RM: Before I step on stage I take a deep breath, close my eyes, and say a little prayer:)

PPLA: 3 favorite things to do or places to go in LA?

RM: You are in great shape and can really dance! Advice for staying healthy and happy?

PPLA: I love staying active, its part of who I am. I’ve been a dancer since I was five years old, and am always dancing, even if just in my living room for my own enjoyment! I also go to the gym where I switch up the workouts every day with things from running, to the elliptical, to classes like Zumba and kickboxing. I also enjoy finding workouts on Pinterest or Self.com that I can do when I don’t want to leave my house to workout!

To find out about Renée’s upcoming projects and new dates for “I Am Me, Because of Three” visit ReneeMarino.com