Q & A WITH TAYLOR HANDLEY, “VEGAS” 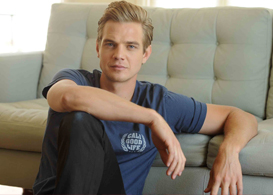 There’s a lot of buzz surrounding the new 1960s-era CBS drama series Vegas, from the writer of Goodfellas and based on real-life cowboy sheriff Ralph Lamb (Dennis Quaid). PPLA got the inside scoop from Taylor Handley, who plays the sheriff’s son Dixon Lamb.

You will recognize Taylor Handley from various guest star roles all over your TV screen, movies like Battle: Los Angeles and Skateland, and most notoriously, bad boy Oliver Trask from The OC. Onscreen, Taylor usually plays dark and slightly warped characters, but real life, he is a laid-back surfer, moviephile, and renaissance man who is committed to art and his passion of acting.

PPLA: You usually seem to get cast as a guy with some deep-seated issues. Is it more fun to play a character with a dark side?

TH: Absolutely. There’s just so much more you can do with a character who’s got issues as opposed to some goody-goody jock, captain of the football team. Early in my career I stayed away from that; it wasn’t what I wanted to do at the time, and those deep characters, you get to really explore them. I like to break a character down.

PPLA: You’re really good at it. Does your new character, Dixon Lamb, follow that prototype?

TH: He’s the wild card. He’s the fun guy. Right now this adventure with Vegas has been so great. I get to ride horses, solve, crimes, chase girls, and my character’s really lighthearted. Right now we’re working on a great storyline, so it’s given me a lot of stuff to chew on.

TH: Ralph Lamb did have a few sons, but for the sake of television, they’ve narrowed it down to one son. I’ve talked to Ralph a few times and he says they were just born tough. From the moment they were born, they came out swingin’. All the Lambs are just rough and tumble dudes.

PPLA: You’ve worked with some great actors over the years. Carrie-Ann Moss and Dennis Quaid are pretty legendary themselves. Who inspires you as an actor?

TH: I’m a big movie buff. I watch movies all the time; the list goes on. Since I was six I’ve just been enthralled by movies and different actors and their mannerisms and—my favorite part is watching an actor process information through a scene they’re in. I like to see their mind work. As I’m in a scene, I like to go from moment to moment be fresh every time. As far as inspirations, I could list 100 right now.

PPLA: Well, I won’t make you do that. What did you think of the project when you first read the script for Vegas?

TH: I thought the project was fantastic because it was penned by Nick Pileggi who wrote Goodfellas and Casino, and Nick worked with Greg Walker who is a fantastic showrunner. I was really excited to play Dixon because he’s been having an affair with a married woman and gets caught. When you first see him he has to outrun a shotgun blast while putting his clothes on. I thought, “This is going to be a fun guy to play.” That’s what I love about acting: you get to do things that people only think about doing or dream about doing. I mean, not that I dream about having an affair with a married woman…

TH: …But outrunning an angry husband, how many people get to do that?

PPLA: The show takes place in 1960s Las Vegas, and from the previews I’ve seen, the setting looks pretty realistic. Did you guys shoot any of it in Vegas, or is that all a set?

PPLA: I didn’t know there was a Las Vegas in New Mexico!

TH: Neither did I, until I was there.

PPLA: I know you’re from Santa Barbara. Are you a fan of Vegas, the city?

TH: Yeah, I remember taking trips out there with my parents when I was a kid, and we stayed at the Desert Inn. I got to play all the fun games at Circus Circus. I went to the Centennial of Vegas a few years back. I like to play poker too, so when I’m out there, I like to go to the poker tables. I also like to see the shows. I saw [Cirque du Soleil’s] The Beatles LOVE recently. It’s amazing what those people can do.

PPLA: Did you know that a Google search of you yields tons of web-shrines and YouTube videos that are just pictures of you set to love ballads?

PPLA: How does that feel?

TH: (Laughing.) It’s a little strange, but I’m not gonna knock anybody. It’s their business what they do with their free time, and I guess I appreciate the support.

PPLA: What else do you do when you’re not acting? I hear that you’re a musician, too?

TH: I just took up the drums. I’ve been drummin’ a lot lately, trying to get better at that. I like to do independent sports: golfing, surfing, skateboarding. I love to travel, pen a few scripts of my own, make a few things. You’ve gotta stay creative. Last year, we made a little short film-slash-music video that I’m really proud of. It takes you into a different little world. I did it with a friend of mine, Jordan Albertson—you can check it out at SinkIntoYou.com.

PPLA: When it comes to acting, do you prefer doing film or TV?

TH: They’re just different mediums. With film I’ve found you get to take a little bit more time to get the shot, to get the scene. It’s not as fast paced as television is. Working with Vegas, with such accomplished actors and such a great crew, it doesn’t matter if we’re going fast because everybody’s nailing it every single time.

PPLA: Have you ever done theater?

TH: I started in theater when I was six or seven and that really developed my love for acting…it was that instant gratification from the audience, that’s what kind of sparked it for me. Since I’ve been doing it professionally, since I was about 13, I haven’t had the time to take a break to do theater.

PPLA: I noticed your iMDB lists a few upcoming projects – do you want to tell us about any of them?

TH: Chasing Mavericks comes out October 26. For 15 years I’ve been trying to book a surf movie because I’m a surfer, I love surfing, and there’s been so many projects I’ve auditioned for and never gotten it. I think it was just the heavens saying “wait…this is the best one,” because Chasing Mavericks is very true to the essence of big wave surfing. There is also this independent film called Channeling. I’m playing another one of those characters who has underlying issues and races cars and lives life fast to prove himself to the world, and I’m really looking forward to seeing the final cut.